Black, Bad and After the American Dream 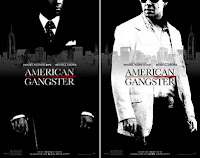 Frank Lucas loved his mother and his family. He was highly intelligent, disciplined, had a strong work ethic, dressed elegantly and was meticulous and careful in his personal style and business dealings. The real life Frank Lucas was all of these things as well as a ruthless drug kingpin who murdered effortlessly and became the most successful black gangster of his era in the 70s. Who else could play him but Denzel Washington?

After Frank's mentor Ellsworth "Bumpy" Johnson (Clarence Williams III), an extremely successful drug lord, unexpectedly dies, Frank, who had served as his driver and sometime executioner, decides to take over his illegal drug business. Frank creates a sprawling, efficiently run drug empire. With the collusion of military officials in Vietnam he begins to export heroin directly from Thailand which is uncut, purer, and can be sold cheaper than anything else on the street.

Director Ridley Scott conjures up vivid and convincing scenarios: black Harlem in the 1970s, drugged out military men in sleazy Bangkok nightclubs, down and out New Jersey landscapes, gritty police squadrons filled with disgruntled cops, and, the "Superfly" pimp apparel of these wannabe drug dealers.

Enter New Jersey detective Richie Roberts (Russell Crowe), a scrupulously honest detective whose claim to fame is that he once found $1 million in cash and turned it in much to the chagrin of his partner and his fellow law officers who deemed him a "rat" not to be trusted by other cops. Crowe is surprisingly restrained and even vulnerable here as the ostracized cop. After his partner dies of a drug overdose from "Blue Magic" heroin, Roberts is handpicked to lead a New Jersey drug task force and he sets out to find the source of his partner's demise.

This eventually leads him directly to Frank Lucas who has done so well that he is able to purchase several nightclubs and apartments and has married a Puerto Rican beauty queen. He is able to bring his entire family of five brothers (eventually to be known as the Country Boys in his drug empire) and his mother (Ruby Dee) up from rural North Carolina; he purchases a huge estate for his mother in New Jersey. Denzel is chilling, alternately loving and charming and then a murderous, remorseless sociopath ready to destroy anyone in his path to riches.

In real life, Richie Roberts alleges that Frank Lucas ordered a hit on his own brother when he was disappointed by his brother's failure to do as he had bid.

Lucas was generally conservative in manner and dress (at least as he is depicted in this film) and only on one occasion does he break with this, dressing in an ostentatious chinchilla fur coat and hat while attending the 1971 Frazier vs. Muhammad Ali fight at Madison Square Garden. In the movie, he catches the attention of Richie Roberts who is working undercover and notices not only his flamboyant attire but the fact hat he has superior seating to the local Italian mafia bigwigs. Richie begins to investigate Lucas.

Things begin to unravel for Frank. History and greed begin to pick away at his kingdom.

His corruption of NYC detectives through bribery goes sour when Det. Trupo (played by a very sinister Josh Brolin) tries to shake down Lucas for additional bribe money prompting a vendetta between the men with Frank destroying Trupo's beloved car and Trupo terrorizing Frank's wife and mother when he destroys his home searching for money. In addition, Trupo vindictively kills a family pet that Frank had inherited from Bumpy. Eventually he tries to kill both Frank and his wife prompting an all out war.

Vietnam ends, the U.S. military leaves the country and, with that, the heroin pipeline from the east into Harlem is jeopardized.

Nicky Barnes (Cuba Gooding Jr.), a rival drug lord, undermines the purity of Lucas' "product" by diluting it even further.

Through a series of wire taps, Richie is able to launch a massive bust of Frank's various enterprises eventually leading to Frank's arrest. Perhaps not surprisingly, he has trouble initially convincing his superiors of the enormity of the enterprise because they disbelieve that a black man could have orchestrated such a large, all encompassing empire.

Frank and Richie finally meet and an odd collaboration is forged where Lucas rats out the corrupt police officers, mafia figures and drug lords who have colluded in his trade (and have now become Richie's enemies as well). Richie, having passed the bar exam, prosecutes Frank who is sentenced to 70 years in prison but which is commuted to 15 years for his cooperation.

After Lucas' trial, we learn that, surprisingly, the real life Richie served as a defense attorney for Frank. He became a godfather to Frank's son and paid for the boy's schooling at a private Catholic school. Thirty of Frank's relations were sent to prison; his wife leaves him and returns to Puerto Rico, his mother returns to North Carolina without her sons. The film ends with Frank rejoining civilian life in 1991, alone, his empire destroyed and everyone that he cared for gone.

The script by Steven Zaillian is exceptionally well crafted and it is mentioned in a special feature of the DVD that the script had been kicking around for a number of years before the film was made with two unsuccessful attempts to start filming (once by director Antone Fuqua who left the film in 2004). Zaillan is responsible for a number of exceptional films including Gangs of New York (2002) and Schindler's List (1993).

Lucas’ real life (the film is not entirely accurate but seems true to the tenor of his life) was even more complicated than this and worth further examination ... No doubt Frank Lucas was a dangerous and vicious man who deserved what he got and probably more but you also have to wonder if this person had had other opportunities what could he have become? A CEO of a company? A visionary businessman? If only his talents had been directed towards a more productive life instead of the manufacture of a drug that destroyed many lives, most of them black.

It's hard not to glamorize this man when he is being played by Denzel Washington. Even at his most reprehensible, there is a core of integrity that makes us sympathetic to Lucas which I think, in retrospective, was a mistake in the film.

There was an intriguing series of discussions on a radio station which featured the real Frank Lucas and Richie Roberts (in two separate interviews). The DJs are stupefyingly dumb in their questioning and they seemed awed by Lucas' exploits rather than horrified but it's worth a listen to the principals involved as well as a look at the BET documentary on Frank Lucas.
Posted by A Lit Chick at 8:20 PM