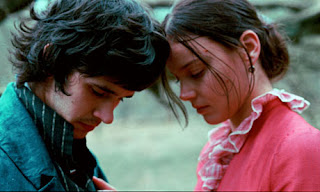 Here lies one whose name was writ on water.

Nominated for Achievement in Costume Design - but it has so much more to offer!!

I first saw this at TIFF last September, 2009. John Keats died at 25 a few years after my beloved Jane Austen in 1817 thinking that he was a failure as a poet. Today he is seen as one of the greatest Romantic poets of our time. Bright Star tells the story of the love between Keats and Fanny Brawne, a young girl of fairly modest means whom he courted for three years and was engaged to before his death. "Bright Star" refers to the name of a poem that he wrote for her.

When Australian director Jane Campion (An Angel at My Table (1990), The Piano (1993), A Portrait of the Lady (1996)) introduced the film during the festival (looking like a gracefully aging hippie with her long blondish grey hair worn loosely and her simple clothes) she said the film was like "a door that opens slowly". It is a slow, quiet film but I like Campion's style. She understands desire, and passion, and can allow for quiet moments of great emotional power in her films.

Keats (Ben Whishaw last seen as Sebastian in Brideshead Revisited in 2008) is depicted here as a serious minded and struggling poet, physically frail, and deeply involved in the care of a younger brother who eventually dies of tuberculosis (as did their mother). Whishaw, usually thin, appears like a gaunt shadow of hisself with a pale complexion and long shaggy hair, looking quite the Romantic ideal.

Fanny (the lovely Abbie Cornish) is portrayed as a frivolous, flirtatious girl obsessed with fashion who makes her own clothes. There is a sly joke here because Fanny's clothes, at least at the start of the film, appear garish and a bit loud for the Regency fashions of the early 19th c. At the beginning she is dressed in bright poppy reds with big ostentatious collars and big ruffles. As she evolves as a woman, so does her style. Later, she appears more graceful and subdued in rich reds and blues and purples.

Keats described her thus to his brother George in his letters: "She is not seventeen - but she is ignorant - monstrous in her behavior flying out in all directions, calling people such names that I was forced lately to make use of the term Minx - this I think not from any innate vice but from a penchant she has for acting stylishly. I am however tired of such style and shall decline any more of it."

Despite his initial antipathy they fall in love - they are thrown together a in a series of circumstances when they share a portion of the same rented house - she, with her widowed mother, brother and sister and, he, with fellow poet Charles Brown (Paul Schneider), a rude, acerbic fellow who, one suspects, is half in love with Keats himself based on the stridency with which he attempts to separate the two lovers.

Gossip and Keats' illness push the couple into an engagement despite her mother's reservations because Keats has no means of making a living. But he is too ill to remain in England for another winter. His friends arrange for him to travel to, and live, in Italy. Unfortunately, their romance ends there as Keats dies in Italy of TB.

Later I read that Fanny married but always concealed her relationship with Keats, which appeared to be largely chaste, a secret from her husband, and only revealing the truth to her three children. After she and her husband died, her children sold Keats' letters in the 1870s. You may read more of their story here.

TIFF of the day: At the press screening for this film in Toronto "the technical staff loaded the last reel of the film backwards. With less than 20 minutes left, suddenly Fanny and John were dancing on the ceiling while their carefully cultivated English accents turned into something that sounded like mangled Danish. TIFF staff apologized as the room filled with sighs."
Posted by A Lit Chick at 8:43 AM

I am definitely going to see this one!

I loved this film too. It moves with a slow grace and the cinematography, sorry to get technical, but it is intimate and as luminous as a Vermeer painting.