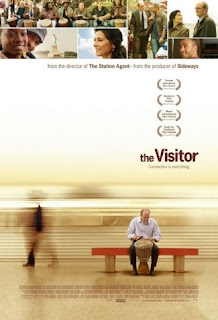 This is a film largely overlooked by the general public I think (but not the critics luckily). It's a really terrific film whose only recognition at the Oscars was a Best Actor nomination for the lead Richard Jenkins. Jenkins, an actor who has been in some 70 films, is perhaps best known for his role as the deceased (but reappearing) father on the HBO series Six Feet Under.

Walter Vale (Richard Jenkins) is a Connecticut College economics professor who fills his lonely hours by taking piano lessons and pretending to be writing a new book between teaching lacklustre college courses. He is an emotionally repressed, very cold individual who seems disconnected to everyone in his life. He is widowed, has a son, whom we never see and of whom he rarely speaks of. Jenkins' face is so expressive here ... even though he says very little it conveys so much: sadness, loneliness, desire, hope for a better life, compassion; he was absolutely wonderful here.
Walter is asked to present a paper at an academic conference at New York University which he reluctantly agrees to do. He has an unused apartment in NYC and is alarmed to discover a couple inhabiting it. He is almost attacked and beaten up by Tarek (Haaz Sleiman), an illegal immigrant from Syria, when Walter comes upon Zanaib (Danai Gurira), his wife/partner from Senegal, in the bathroom. The couple have been deceived into paying rent to a man claiming to be the owner of the apartment during Walter's prolonged absence. In a panic, they gather their belongings and leave. Walter persuades them to return and stay until they have found a new place to live.

Here begins a a slow flowering of Walter's hidden passion for music and a desire for community. Tarek teaches him to play the djembe, an African drum, and a bond forms between the two men. In between his appearance at the conference he joins Tarek in impromptu drumming circles at Central Park. Walter even pitches in for Zanaib who sells "ethnic" jewelry at her little street vendor's table when needed.
Tarek's warm and charismatic nature has unleashed something in Walter. On one musical adventure the two men return by subway to meet Zanaib. Tarek is mistakenly thought to be jumping the subway turnstile and is caught by two subway cops who discover that he has no ID and is an illegal immigrant. The aftermath of 9-11 has reared its ugly head and an atmosphere of terror and paranoia makes every Arabic person a suspect. He is sent to a detention centre in Queens.

Walter hires an immigration lawyer as Zanaib leaves the apartment as she feels it is inappropriate to live there with Walter despite his protests. As an illegal, she cannot visit Tarek without being found out so the task falls to a bewildered, nervous Walter.
Walter is further alarmed to find Mouna (Hiam Abbass), Tarek's mother, literally on his doorstep in NYC. She lives in Michigan and has not received a phone call for almost a week. By the fifth day she realizes that something is terribly amiss. She, too, is an illegal immigrant and cannot risk visiting Tarek. But Walter convinces the lovely, elegant Mouna to remain in the apartment.

A gentle courtship unfolds and the two fall into an amiable domestic routine: Mouna cooks and cleans the apartment; Walter tends to the business of having Tarek released. She urges Walter to return to Connecticut but he reveals that he has no desire to return to his lonely, sterile life. He dislikes his life: the same course that he has taught for twenty years; the fictitious book that he is allegedly writing but has no interest in completing; his empty life as a widower eating alone. He arranges a leave of absence from the college so that he might devote himself to widowed Mouna and her son.
One day, acting on a wistful desire that Mouna has expressed to see a certain Broadway play, he takes her to see a production of Phantom of the Opera. The gesture is small but intensely romantic.

But shortly afterward they discover that Tarek has been deported, without warning or notice, back to Syria. This infuriates the normally sedate Walter who cannot fathom the process or mindset which has brought them all to this point. Mouna makes a decision to return to Syria to be with her son with the understanding that she can never return. Walter can do nothing and she leaves to join Tarek.

But his life changes for the better and so does he. What a wonderful film - true, honest and full of passion.
Posted by A Lit Chick at 9:08 AM