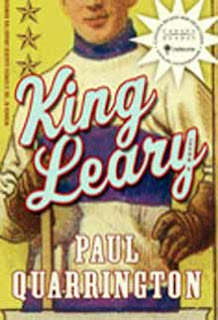 Why, why does a self-professed hater (disliker?) of hockey want to read a book based on a fictitious hockey hero named King Leary? Oddly, I find hockey players very appealing. Is it because the husband is a goalie and a fanatical devotee of the Leafs? Perhaps. I find them … sexy. I like the image of the punch drunk, boozing, scrappy Canuck. Why I could not tell you. Especially the old school hockey players who looked so much older than the pups in the NHL today.

Percival “King” Leary is such a being. Now confined to a nursery home in South Grouse, Ontario, with a roommate who is his former nemesis of sorts, “Blue” Hermann, an alcoholic newspaper man who covered King through his glory days after WWI through to the 1940s.

King has been tapped by a ginger ale company to hawk its wares in a television commercial with Duane Killebrew. Based on the superlative accolades in the novel, the time this was written in the late 80s, and Killebrew’s numerous commercial endorsements, I would say that this character is a stand-in for Wayne Gretzy.

King leaves for Toronto with Blue and Ian, a sympathetic caregiver from the nursing home, to make this commercial. Things do not go as planned. Blue is a confirmed alcoholic. King has bouts of dementia. Ian has his own issues regarding various substances. The King gets both sentimental and ornery when he finds out that it is not his beloved Canada Dry that he has signed up to promote but the far more inferior Acadia Dry.

Oh, did I mention King’s frequent hallucinations? Throughout the trip King sees and hears the voices of the dearly departed: Clay Clinton, the owner of the Maple Leaves; his ex-wife Janie; Manny Oz, a friend and fellow hockey player; his dead son who he has always blamed for ruining his career by leaving a toy on the ground which messed up his knee.

King escapes the ordeal of the TV shoot with its overbearing director, snotty make up artist and the generally disinterested crew by persuading Duane to drive him to the Canadian Sports Hall of Fame where he longs to relive his brief moments of glory. He does not play nice at the Hall before registering a final protest against the indignities of age, of the passing of one’s glory.

Some images will stay with me for along time: the four monks who taught King and Manny to play at the home for delinquent boys; King fighting in WWI; King and company wreaking havoc at the bar across the street from the Gardens …

It is a loving tribute to that golden age of hockey. Ya gotta love the players, even if you don’t love the game.
Posted by A Lit Chick at 7:16 AM