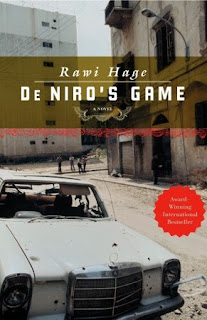 I love discovering new worlds through new writers. In this instance, I had never read a fictional story set in Beirut, Lebanon during the civil war of the 1980s. Very simplistically put, that war involved warring factions between Christian and Muslim Lebanese but began to include other nations and groups such as the Palestinians, Syrians and Israelis. For a more nuanced, detailed history please see here.

Two Christian Lebanese teenagers named Bassam and George (the latter nicknamed De Niro) live in a nightmare world of internecine fighting in Beirut. They drift aimlessly from scams to rip off the casino that George works in, to trying to seduce girls, clubbing and drinking to excess and devising ways to escape their lives.

Bassam has more than a passing resemblance to Albert Camus' character Meursault in L'Etranger. To cite a few similarities:  the apathy and lack of emotional engagement; the death of each one's mother; the chaotic violence in which they find themselves embroiled; and, ironically, their involvement with the death of another man whom they had no intention of harming initially. Hage cleverly inverts the ethnciity of his main character: Camus' Meursault is a French-Algerian living in Algiers among Arabs; Hage's Bassam is a Lebanese Christian Arab seemingly obsessed with French culture who ultimately ends up in Paris. Although Hage does not strictly adhere to the L'Etranger plot, he certainly conjures up the sense of menace and ennui which permeates this forerunner.

Cyril Connelly's description of Mersault in the introduction to the English language version of the novel aptly describes Bassam too:


Meursault represents the neo-pagan, a reversion to Mediterranean man as once he was in Corinth or Carthage or Alexandria or Tarshish, as he is today in Casablanca or Southern California. He is sensual and well-meaning, profoundly in love with life, whose least pleasures, from a bathe to a yawn, afford him complete and silent gratification. He lives without anxiety in a continuous present and has no need to think or to express himself ...

In De Niro's Game, relatives disappear; abandoned ravenous dogs roam the streets; the city's infrastructure has dissolved; and killings occur randomly and frequently. Bassam is seemingly, and strangely, unmoved by all of it.

One of the more disturbingly vivid scenes involves the night that some men decide to eliminate the roaming dogs who threaten the citizenry, described by the narrator as the "battle of the hundred dogs". Sometimes Hage's prose becomes a surreal and rich fantasy which transforms the scene before the narrator Bassam's eyes:


They are killing dogs! The words of the Christians flew from one balcony to another. Two jeeps carrying seven militiamen surrounded the dogs ... An Afghani hound bitch was executed for treason, while in Paris her beloved owner was on all fours on a silk bedsheet ... A cocker spaniel was pursued by a fat fighter, while his mommy was buying filet mignon in the Champs Élysées  for an evening of wine and debauchery ... The chihuahua was ... finally shot at closer range, under a car, while his mother in Venice, discussed the origin of silk in a chic salon over espresso.

Later, Nabila, George's aunt, bitterly compares the men to dogs, presumably in their viciousness towards each other but also in their vulnerability as the prime victims of the violence that surrounds them for the men are struck down like dogs in the street.

This is a world where the average citizen, armed to the teeth, may pull up to a crowded gas station, take out a gun, shoot a few rounds to drive away the other customers and then fill up his gas tank and then speed away. Or when someone is rushed to emergency and his friends find that he is not getting the medical attention he needs quickly enough, they, again, will pull out a gun, shoot up the hospital and medical people rush in to care for the man.

George acquires a gun and new friends whom Bassam is uneasy with. George also joins the Christian militia and starts dealing drugs. He goes on mysterious "training" sessions in Israel.

The boys become estranged. George wants to remain and fight the Muslims; Bassam merely wants to escape. Paradise, which eludes him, he names Roma, some vague European destination where all will be well.

Love and passion are equally complicated where all eyes are upon the young girls to vouchsafe their virginity. Rana, Bassam's object of desire, "sat with her legs crossed, protecting her virginity from predators' eyes, tongues, and crooked teeth". They both (but more especially Rana) must be discreet in their interactions.


She was waiting for the housewives to fold up their ropes and their long tongues that entered every door, wrapped around every pillow, slithered like serpents in beds, and stretched under every young skirt to assess menstrual flows and hymens.

Bassam's already fragile world begins to disintegrate ... Both George and Rana eventually appear untrustworthy to Bassam. Bassam's mother dies in a bomb attack. A far off uncle offers Bassam $1,000 to leave Beirut. Singled out and tortured for an unsolved murder by the militia, Bassam tries to make an escape by stowing away on a ship to Marseilles with the aid of George's aunt. The promised land proves tricky and dangerous. He is immediately set upon by skinheads when he lands whom he is only able to fend off because he is armed with a gun.

With only the name of George's father in hand (a European diplomat whom neither Bassam or George have ever met) he contacts the family in Paris. Claude, George's father, is by now dead but the family wants to know more about George so Bassam is invited to Paris.

Perhaps as a show of Bassam's increased mental fragility, he imagines himself variously as one of Napoleon's soldiers; as a revolutionary during the Terror killing aristocrats; as an anti-Vichy resistance fighter (such was Camus); and, vaguely associating himself as the character of Meursault in Camus' L'Etranger. Hage's terrifyingly poetic imagination leaps to the fore here. Bassam half hallucinates the last fifth of the novel and we are never entirely certain whether he is mad. The reference to Meursault begins to makes sense ... Bassam shows little emotion whether it is at his mother's funeral or Rana's infidelity or the turbulent events that take place in Paris.

He becomes obsessed with Rhea, George's beautiful half sister, who is trying to help him. In a series of spectacular screw-ups, he alienates Rhea and some sinister individuals who surround Rhea. Bassam cannot seem to let go of the violence which has formed him in Beirut.

Hage's language throughout is lush and highly visual. Comparisons to Hemingway, despite the prestigious blurb on the jacket, are shallow and inappropriate. He sometimes suffers from a surfeit of rich language utilizing six or seven metaphors in certain passages where perhaps two will do such as in this section where Bassam is being tortured and listens to the sound of boots retreating and coming towards him:

There is a certain awkwardness and ring of insincerity here (a rare misstep in this novel) - the sounds of your torturers' boots remind you of "lollypops" dripping on your chin? This tears me from the narrative and the illusion of this tortured young man is destroyed for me.

Still the ending is spectacular and it is a worthwhile, fascinating read.
Posted by A Lit Chick at 8:15 AM