No Country for Pretty Much Anyone 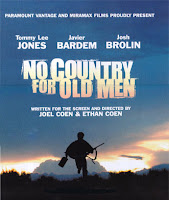 Based on the Cormac McCarthy book of the same name, this film deservedly won the Oscar for best picture this year and introduced the character of Anton Chigurh (Javier Bardem), a new and frightening villain into the zeitgeist.

This is not really a traditional Western nor an action film nor a chase film but an odd hybrid of all three. But it most entertains as a revisionist Western, a subversion of traditional Western films and its archetypes. As the Coens explained it, it involves Ed Tom Bell (Tommy Lee Jones), a good man; Anton Chigurh (Javier Bardem), a very bad man; and, Llewelyn Moss (Josh Brolin), a man in between those two extreme values.

From the opening scene set in West Texas in 1980, when Anton Chigurh, a professional hit man of indeterminate ethnic origin, violently, and emotionlessly, strangles a sheriff's deputy with his own handcuffs you know that you are seeing a new type of villain. Llewelyn Moss unfortunately gets into Chigurh's sight lines when he stumbles across a number of corpses and a dying man begging for water in what is obviously a drug deal gone bad.

Moss finds two million dollars at the scene of the massacre and promptly leaves the dying man there. Later that night he wakes and thinks better of it, returning with water for the man only to be nearly caught by what appear to be Mexican gangsters returning to the scene. This precipitates a wild chase where Bell, the local sheriff, is chasing the professional hit man Chigurh who is chasing Moss and his millions. Chigurh tracks Moss through a hidden radio transponder across Texas.

I will not detail all the ins and outs of the plot which are both mesmerizing and convoluted. It is extremely bloody and oddly beautiful to look at it, clever and satisfying. Far more interesting I think is how the traditional
Western is turned on its head.

The Good Guy is the Primary Focus
Here the good guy is of marginal interest. As Bell hunts for Moss and Chigurh, he is of limited interest to the viewer, far less complex and interesting than the terrifying Chigurh or the morally ambiguous Moss who leaves a man to die and risks the life of his wife in his aim to keep his ill gotten gains. Chigurh is complex, his motives unexplained, his absolute singlemindedness in his "professionalism" is terrifying.

The Good Guy has the strictest moral principles
It ain't necessarily so. Here Chigurh lives by a rigid moral code. He made an offer to Moss to spare his wife if he forfeits the millions, Moss chooses not negotiate and suffers the consequences. True, Chigurh makes these decisions based on the flip of a coin then sticks to his decision ruthlessly.

Women are spared
Women often seem to exist n a separate, inviolable sphere in Westerns (unless being massacred by the ubiquitous Indians in older, more racist Westerns). Here Chigurh offers to spare Moss's wife Carla Jean Moss (Kelly MacDonald) if Moss returns the money, an offer that Moss angrily refuses. Moss gets his as does the dim-witted Carla Jean. No one is spared.

Evil does not triumph
In a traditional Western, the good guy (epitomized in old school Westerns by the White Hat) triumphs; perhaps he falters, perhaps he is weak but in the end he vanquishes evil. Here, Chigurh escapes, wounded and damaged, but lives again, presumably to kill again. Bell seems vanquished by the evil he has seen, broken (hence the title).

I am eager to find out if the book is as good as the film.
Posted by A Lit Chick at 8:12 PM