The root of suffering is desire ... 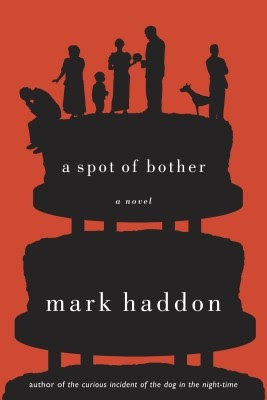 How to explain the strange, understated allure of this book? The plot, if described, appears so mundane on the surface as to invite yawns. George Hall, our hapless hero, is having a "spot of bother" as he so self-effacingly describes it. It is a study in middle class malaise.

He is retired and experiencing some sort of nervous breakdown. He thinks he has cancer (he has eczema). He thinks he is insane which causes him to stay in bed all day and watch Hollywood blockbusters and perform "surgery" on himself (to say more would spoil it).

His wife Jean is having a crisis of her own, namely an affair with David, a former colleague of George's who wants Jean to leave her husband.

Katie, their daughter, is poised to marry for a second time even though everyone acknowledges (the groom Ray included) that working class Ray, a good if not too sophisticated bloke, is "beneath" her.

Jamie, George and Jean's son, is afraid of commitment, ultimately driving away his lover Tony with his dithering about whether to become more seriously involved.

George's condition, real or imaginary, worsens when he inadvertently catches sight of his wife making love to David in their own bed. Yet he tells no one ... he goes off on a largely fruitless meander and his condition worsens.

Katie's wedding plans falter when she has coffee with her ex-husband and Ray follows her, throws a tantrum and disappears for three days.

Perhaps this is the definition of a good writer: When Mark Haddon writes from the perspective of George I begin to suspect that Haddon is a retirement age, modest, very repressed middle class British man. When he writes about the post-menopausal, late sexual awakening Jean, I believe that he has obviously observed this specimen up close. Likewise with his descriptions of Katie and Jamie. Haddon, I come to believe, is, alternately, a modern day parent with anger management issues, familiar with the travails of dealing with children, or, conversely, a young gay, slightly over sensitive male who has been about a bit.

Haddon captures accurately the neurotic middle class of Britain (at least as I envision it), the minutiae and the drudgery of everyday life, the intensity and the boredom of long term relationships, the sense of obligation, the shiny newness of a sexual affair.

Life, real life, like all intimate experiences, good or bad, is coloured with inappropriate longings and misgivings, unhappy second thoughts. And like real life, no domestic situation depicted here is without its emotional tribulations.

There are only one or two places where I felt the author was repeating some homespun truths which, I think, his writing has already communicated such as: "We're just the little people on top of the cake. Weddings are about families." Haven't we all (well a good many of us) come to this conclusion?

One astute member of my book club mentioned that Buddhist saying "The root of suffering is desire ..." This certainly applies to these characters who yearn for more, are never satisfied, desire more.

Of course the denouement is at the wedding where all the principals are present and George, loaded up on alcohol and valium, exacts a sort of revenge on his tormenters. The end is satisfying and comic and sad (another sign of a good writer). Lord Byron once observed that "all comedies end in marriage". And it does indeed here.

Mark Haddon is also the author of the celebrated The Curious Incident of the Dog in the Night-Time. Also on my future reading list ....

Thnaks to SI for giving me the title of this blog based on a Buddhist saying.
Posted by A Lit Chick at 6:50 AM