The Best of Youth, Part 1 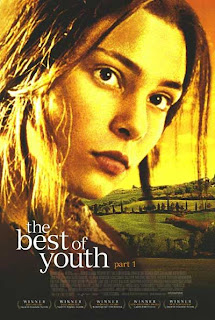 Ten years ago or so, I was lucky enough to interview this director for a small magazine of Italian culture (now defunct) regarding his excellent film on Pasolini entitled Pasolini, an Italian Crime. I was pleased to finally get my hands on a copy of La Meglio Gioventù which was originally intended as a six hour TV mini-series to be shown in Italy.

La Meglio Gioventù is a family saga beginning in Rome 1966 and ending in 2003. It has been compared to Visconti's Rocco and his Brothers (1961). It focuses primarily on two brothers: Matteo Caroti (Alessio Boni) and Nicola Caroti (Luigi Lo Cascio) and how their lives diverge as they reach adulthood. Matteo is emotional, self-absorbed, volatile. Nicola is more thoughtful, sensitive, politically aware.

These are difficult roles to play physically as they span almost forty years so, inevitably, they appear a little long in the tooth to play university students, are perfect in early middle age and may prove unbelievable in old age (we shall see in Part 2).

Matteo attempts to rescue Giorgia (Jasmine Trinca shown here in the poster to the left), who is -how else to phrase it - a mental patient, who has undergone electroshock therapy, by effectively kidnapping her and trying to return her to her father in Ravenna. The plan goes awry and Giorgia is taken away by the police and disappears.

Originally on their way to the Apennines for a holiday after exams with two other friends, the brothers now separate in anger. Matteo, more emotional and volatile, and clearly disturbed by what has transpired, leaves university and joins the army. The decision is somewhat inexplicable despite Matteo's emotional state. But it is a plot device which serves to separate the brothers and the paths they take. Nicola travels north, encountering the burgeoning hippie culture in Europe and working in Norway for a time. There he learns of massive flooding of the Arno River in Firenze in 1966 and decides to volunteer in removing precious artifacts from the destructive path of the flood.

The brothers are reunited in Firenze. Nicola as a volunteer, Matteo as a member of the Italian army. Matteo jokes that he will one day become a cop which horrifies Nicola. But soon Nicola is off to pursue Giulia (Sonia Bergamasco), a lovely pianist/student activist he has met, who lives in Turin and is involved in the student protest movement in 1968. They are politically involved well into the 70s where the brothers meet again.

Matteo has indeed become a cop and is now one of a cadre of police roaming the streets of Turin searching for rioting students in 1974. Luigi, a fellow police officer and close friend of Matteo's, is attacked, becoming paralyzed, and Matteo rushes to protect him, beating a demonstrator severely. Matteo then faces charges. The brothers try to connect emotionally again despite Giulia's animosity towards Matteo and his political views.

It is temptingly obvious to see the brothers as two sides of the same coin, the two faces of Italy. Moderate, politically progressive, humane Nicola (the new Italia) and beautiful, rigid, authoritarian Matteo (the old Italia) the older brother.

Matteo is transferred to Sicily in the late 1970s. When asked why he wants to do so he merely replies that he does what the is told. He follows orders. He joined the police force to observe rules and "apply them". He minds his own business. His superior says that he is perfect for Sicily as that's what everyone else does here. He becomes a crime scene photographer soon frustrated by the see-no-evil, hear-no-evil response of the populace to the frequent murders and assassinations of the time. Obviously the people are cowed by the Mafia although the word is never mentioned.

Nicola, now a doctor, works in an asylum and tries to improve conditions for psychiatric patients. While leading an excursion into an institution suspected of abuse he encounters Giorgia again, more troubled than ever, and bound, hand and foot, in the cellar. Nicola invites Matteo to come visit them and see Giorgia again. She is even less responsive than before. It seems clear that both brothers are still in love with her.

Giulia, frustrated by the lack of swift change in Italian society, is drawn to a communist cell (the Red Brigades) which advocates more violent responses to authority. Eventually she deserts the family, presumably to become more involved with terrorist activities.

Part one ends on a happy note:

Francesca, the men's youngest sister is marrying Carlo a close friend of Nicola and Matteo's. But questions still linger .... what will become of Giorgia? Will Matteo find peace within himself? Will Giulia return? Will Nicola and Giulia be reunited?