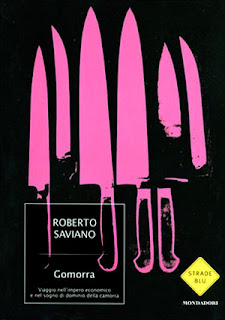 Mistakenly, and with some relief, I see that Gomorra is about the Napoli Camorra and not the Sicilian mafia. It's a little tired no? This obsession (my obsession also) with the Sicilian mafia?
Based on the stories found in Roberto Saviano's collection entitled Gomorra (a combination of the words Camorra - the mafia in southern Italy - and Gomorrah - one of the biblical cities of depravity destroyed for its wickedness) the film cuts between the lives of different people affected by or involved with the Camorra.

Saviano is a hero in Italy and internationally for writing about the Camorra in Gomorra. He denounced its activities and there have been repeated attempts on his life by the Casalesi clan. He has been assigned a personal body guard for his protection. By January 2008 more than 1,200,000 copies had been sold in Italy.

Don Ciro (Gianfelice Imparato), who serves as a "submarine," pays out money to the families of those that are imprisoned for their loyalty or silence regarding the organization until he witnesses the murder of a woman (women are customarily exempt from the wrath of the Camorra) for her son's desertion from his gang.

Two young hooligans Marco and Ciro (Marco Macor and Ciro Petrone) play at being Tony Montana from Scarface, stealing weapons from the Camorra, sticking up the local video arcade, pretending to be gangsters, and they pay the ultimate price for it.

Pasquale (Salvatore Cantalupo), a tailor whose garment factory is financed by the Camorra resorts to assisting a rival Chinese run a designer knock off garment factory and pays for his "betrayal".

Roberto (Carmine Paternoster), a young man searching for work and then landing a position assisting an illegal toxic waste disposal company walks away after he cannot stomach his boss Franco's (Toni Servillo) slimy and despicable tactics.

Thirteen-year-old Totò (Salvatore Abruzzese) who imagines himself a potential player must betray an innocent women to prove his worth and does so with very little convincing.

It's not pretty; it's not a picture postcard of Italy. It's ugly and brutal and utterly realistic. The faces and the scenarios and the situations all ring true even if fictionalized.
Posted by A Lit Chick at 4:44 PM