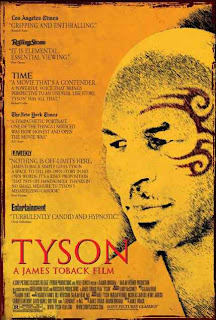 Neither boxing nor Mike Tyson interest me. When I heard that this film had been made, I likely had the same response that many might have had: So, Toback is going to try and clean up Mike Tyson’s image and present an alternative, more palatable view of what this guy is? Buona fortuna buddy ...

Tyson has come to epitomize an unsavory and disturbing stereotype: the feral, dangerous, uncontrollable black male. A street punk, a man who abused his wife, a convicted rapist, a vicious fighter who bit the ear of an opponent in a boxing ring, an inarticulate and volatile loser long on the wane …

But … this film accomplishes what I would have thought difficult, if not impossible, to do: not rehabilitate Tyson but make the viewer understand why he is what he is. And that’s invaluable in understanding any human being. I would not say that as a viewer I might approve of or forgive his transgressions but, as a human being, I think I am more aware of what lead him down this tortuous path.

Many times, the camera will focus on different physical parts of Tyson during his description of his life and its many travails: his eyes, his mouth, his hands, the large tattoo on his face, in multiple frames, with the soundtrack running through in two or three layers of sound. It may not be an original effect but it serves an effective purpose here: is his monologue only part of the true story as Tyson is the sole interviewee? Only part of the truth of his life’s narrative? Does it reflect an aspect of madness that he experienced when in jail during solitary confinement? Whatever its purpose it works.

Tyson addresses all the controversial issues head on often in a mangled and slightly comic English unique to him, openly, artlessly: his unhappy beginnings, his violent temper, his troubled marriage to actress Robin Givens, the rape charge made by beauty contestant Desiree Washington for which he served a three year sentence, the fight with Evander Holyfield where he bit the man’s ear, the prison term, the conversion to Islam, a tangled financial and emotional relationship with Don King, the fight promoter whom he alleges stole his money.

Toback is very clever in this simple technique as Tyson’s candor immediately disarms the skeptical filmgoer. Apologies are not made but guilt and personal flaws freely admitted. The man seems a shadow of what he once was, or, at least, what he once attempted to portray to the public. Shy and awkward, often afraid of situations and personal failure, nervous and fearful around women, forever the fat boy taunted by bullies who grew so strong that none could challenge or beat him.

Fatherless and haphazardly raised by what he describes as a “promiscuous” mother, the boy drifted into petty crime and thievery. Luckily, in juvenile detention he was guided towards an older trainer named Cus D’Amato who took an interest in the wayward teenager. He instilled confidence in the boy and trained him to be the ruthless fighting machine that he came to be winning the world heavy weight title at 21. With D’Amato’s death in 1985, things did seem to spin out of control for Tyson who still mourns the man as a father figure and a mentor.

Woefully, great success does not necessarily prepare an individual for what lies ahead; in fact, it seems to exacerbate existing emotional problems: an inability to control his temper, an insecurity which invites leeches and parasites of both sexes, an inability to form healthy relationships with women and friends. It has been a complicated and eventful life and not unworthy of examination.

I don’t know the truth about this man. Toback has claimed in interviews that no less than the legal eminence Alan Dershowitz examined the evidence against Tyson regarding the rape charge and said that the case should have been thrown out, that the man was railroaded. To this day, it is the single thing that he will not take responsibility for, claiming that Washington is a liar who ruined his life.

I see a defeated, frightened man whose career is behind him with no discernibly clear path ahead. The footage of the interview of Tyson at the end of his last fight in 2005 is very painful to watch. He admits he has no heart for the sport and just wants out of boxing.

But he seems to have rethought his priorities and is more concerned with seeing his family succeed than achieving any personal goals for himself – and that in itself represents a profound change for the man. His highest aspiration today appears that he wants a grandchild. Who would have thought it?
Posted by A Lit Chick at 9:23 AM