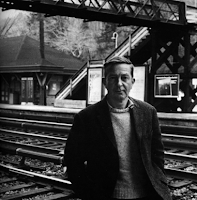 What a tender thing, then, is a man. How for all his crotch- hitching and swagger, a whisper can turn his soul into a cinder. The taste of alum in the rind of a grape, the smell of the sea, the heat of the spring sun, berries bitter and sweet, a grain of sand in his teeth - all of that which he meant by life seemed taken away from him.

A ruined upper middle class WASP family in post war America appeals to me like the decayed ruins of an exotic and unknown culture might to another reader.

Cheever, perhaps more than other American writers has been its chronicler; hence, the description "Chekhov of the suburbs". More than anything this book seems to me to be about the faltering and flimsy construction of masculinity in the mid 20th c.

Three men of old New England stock, Leander Wapshot and his two sons Coverly and Moses Wapshot, make their way in the world. Leander, a sea captain, older, dissolute, still clinging to past familial glories in a Massachusetts fishing village drives his boat the S.S. Topaze for a meager pittance. The boat is capriciously on loan to him by cousin Honora Wapshot, slightly senile and prone to vindictiveness when crossed, who holds the purse strings to the family fortune such as it is.

Honora has high expectations for the two Wapshot heirs, Coverly and Moses, who must marry and reproduce on pain of disinheritance. When she inadvertently catches one of them making love to a girl he is banished and forced to make his way in the world. The other son follows suit. Moses lands in Washington and Coverly in New York.

Desire propels these three men, father and sons, into amorous but perilous situations. Leander, in his youth, is blackmailed into marrying a pregnant teen despoiled by his lecherous, conniving employer only to see the child taken away and his new bride take her life in despair.

All sexual acts and attractions lead to tragedy or dead ends ("Lechery sat like worry on his thin face") rather than happiness and fulfillment. The book is filled with so much male rage against women that it boggles the mind. Women deceive, manipulate, and control the destinies of their hapless men and relations. One has to wonder what prompts this rage.

Leander, after crashing and ruining the S.S. Topaze, faces the horrifying prospect of having his wife Sarah turn it into a floating gift shoppe. Emasculating (which is a word that Cheever explicitly uses in the novel in this context) doesn't even begin to express the the effect upon Leander.

Moses, after a series of missteps, marries Melissa, the ward of an eccentric near relation Justina Wapshot who controls both of their fates with her wealth and hatred of the male sex. Wicked, controlling Justina, whose idea of a wedding gift is two single beds.

Coverly marries Betsey, a sweet but neurotic girl, and moves to a suburb outside of New York where he works as a Taper (he works in the Taping Dept. for the military). Cheever captures the sterility and boredom of suburban life and the hidden, unspoken of dramas when the lonely Betsey tries to make friends with another couple with almost near disasterous consequences.

It is always unwise to read too much autobiographical detail into a writer's work; however, the character of Coverly with his ambivalent sexual feelings towards men does seem to reflect Cheever's own, now widely known, conflicted bisexuality. Start with the section that begins: "And now we come to the homosexual part of the story ...." for further elucidation.

The book is beautiful in many ways, eloquently painting male ardor, sexual yearning and fascination with the mystery of femaleness ("desire seemed to darken and gild her figure like the cumulative coats of varnish on an old painting"). He paints small town life prettily ("The old clubhouse that looked as if it had been put together by old ladies and mice ...") but does not avoid the ugliness that sometimes lies beneath.

True, I could do without the rapturous descriptions of fishing and some of Leander's ruminations in his personal journal but I am happy that I finally picked up one of Cheever's books.
Posted by A Lit Chick at 9:17 PM

You quoted what to me is the best portion of Cheever's novel. Nice post.

Yes, stereotypes aside, they are as vulnerable as women in many ways.