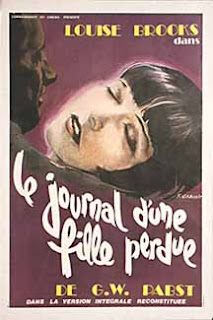 The divine Louise Brooks never fails to mesmerize even eighty years after this b&w film was made. One of my absolute favourite actresses. Pabst, very famously, fell in love with Brooks during the shooting of Pandora's Box (1928), the first film they did together, and it shows in every shot of Brooks in both films. Like the husband says, "Those Germans sure knew how to light a girl ..."

Henning, her father, hypocritically has also taken to seducing and impregnating his housekeepers without repercussion much to the shame and horror of Thymiane.

She gives birth to an illegitimate child. As neither Thymiane nor Meinhert want to marry, the girl is forced to give her baby away by her father and is then sent to a militaristic girl's reform school run by a sadistic Director (Andrews Engelmann) and his equally frightening and cruel wife (Valeska Gert) who appear to derive sexual pleasure from tormenting the girls. Her father comes under thrall to Meta, a conniving housekeeper whom he eventually marries and who does not want Thymiane around.

Pabst had a genius for selecting the right faces for the silent screen: the greedy, selfish Meta; the evil, frightening faces of the Director and his wife; the lecherous father Henning; the weak-willed but good-natured Count; the dour, prudish family that eventually drives Thymiane away; the vicious, predatory Meinhert ...

Resourceful Thymiane escapes from the school with her friend Erika and the aid of the sympathetic Count Osdorff (also someone spurned by his family) and with the aid of the other girls who physically restrain the hated Director's wife and steal her keys. It's an amazing scene where we see the two malefactors almost drown in a sea of hands and legs as the girls overwhelm them. It's like an image of locusts devouring their prey!

Thymiane searches for her child only to learn that she has recently died. She wanders the streets completely desolate and then finally searches for Erika, her only friend, who now works in a brothel. Thymiane soon joins Erika in her trade slowly seduced by the company, the beautiful clothes and good cheer of the house. Sadly, it appears the only place which has extended any kindness to her.

There is a bit of a silly subplot about Thymiane marrying Count Osdorff and getting her inheritance from her father's estate in atonement for his abandonment of her. Thymiane promptly gives away her inheritance to her stepsister as her step-family is now destitute. The count ain't too happy either as he was expecting a sizable inheritance to share and soon ends his life. But the Count's father takes responsibility for his son's fate and decides to assist Thymiane financially.

Returning to the reform school as a wealthy trustee, Thymiane now enjoys a life of privilege, and decides to use her new role to help girls such as Erika.

According to the mores of the times, bad girls must suffer for their misdeeds but, surprisingly here, Thymiane triumphs over her enemies despite giving birth to the illegitimate child and a life of prostitution. Of course, in order to redeem herself in our eyes, she must vow to assist other girls in similar situations ... and she does.

As saccharine and cliche as the film can be, Brooks shines in every scene, her beauty is extraordinary, like the picture of a sun in the middle of each frame - conveying sorrow, joy, pleasure, anger across her exquisite features and for the most part her acting is remarkably restrained in style compared to those flailing around her trying to convey intense passions.

What pleasure she gives us on the screen! If only her life had been a happier affair (read her autobiography Lulu in Hollywood for more detail). I urge you to see both this film and the more morally complex Pandora's Box.