Against the Dying of the Light 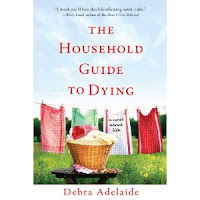 Rage, rage against the dying of the light. Dylan Thomas

The Household Guide to Dying by Debra Adelaide (Penguin Group, 2007) 371 pages
Delia Bennet is a seemingly typical housewife with two kids, a husband and a successful career as a dispenser of advice about domestic issues in a regular column (food preparation, recipes, cleaning tips, etc...) Delia is so successful that she has written a series of guides to a happier domestic life.

But like all lives, hers is not so easily described or categorized. Delia has terminal cancer and is dying - after three operations and two years of on and off chemotherapy. This could be depressing but author Debra Adelaide does not make it so. There is a serenity here in the writing that is unexpected.

So Delia studiously composes lists to organize her small family (including the future wedding of her eight year old daughter Daisy). She cooks meals to be frozen and eaten after she dies. She plots to have a partner ready for her husband after her death. And she attempts to write a Household Guide to Dying for her readers to cope with their own future demises. 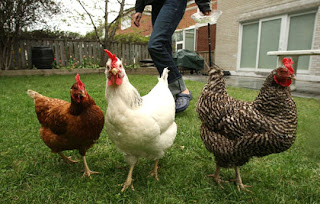 Adelaide writes with sensuality and colour describing Delia's current life amongst the chickens, many books and lush vegetation of her Australian home. The domestic detail is charming especially her relationship with her chickens whom she has named after the five Bennett sisters in Pride and Prejudice (the silliest chicken being, of course, Lydia).

She captures the household dramas between the children and parents, small tiffs with neighbors, frustration with the spouse who doesn't clean up, the comforting daily routines of prepared meals, domestic responsibilities, collecting freshly laid eggs and making pots of tea, etc... Her style is breezy and self-assured with pithy, sometimes caustic, exchanges by mail with her readers interspersed between the chapters.

Adelaide also captures, for me, the link between the process of writing and domestic work which, I think, is rarely talked about:


... domestic work provided valuable thinking time. A lot of words had been written in my head while I ironed or mopped. I had wondered if there was a neurological link between gentle repetition of your arms wielding a broom or your hand stirring a pot and the ideas that filtered through to the front of your mind; some fusion between physical action and creative ignition.

Her sometimes uneasy relationship with her mother Jean, her frustrations with husband Archie and the petty squabbles with the little girls Estelle and Daisy all ring true.

Delia has unfinished business. We learn of Sonny, whom she gave birth to at the age of eighteen with Van, the father, a musician and son of the circus (literally - his people are circus performers). He abandoned her in a small town, without warning, and never reappeared in her life.

Delia makes a final road trip to Amethyst where Van's family lived (and possibly still resides) in search of an elusive someone - is it Sonny or Van, Sonny's father, or possibly Pearl, Archie's old girlfriend, an Elvis-worshiping eccentric who is still in love with Archie and resents Delia for stealing Archie from her? Or someone else? It is clearly someone whom she seems to urgently need to speak to before she dies.

Her child Sonny is not in the picture (or so it appears) and the question lurks in the readers' mind: what happened to Sonny? We soon find out...

Delia plans the details of her funeral including the delivery of a handmade casket to her home which she encourages her daughters and husband to "decorate". Here the story goes off the rails for me... Anyone with children will tell you that one of the biggest fears a child has is the death of their parents. Buying your own casket, parking it on the lawn and encouraging your daughters to paint it does not assuage their fears nor, I imagine, help them cope with death. But I might be mistaken.

I hesitate to use the words "not normal" or "unnatural" in a fictional situation (or any situation really). Who am I to judge how a dying woman would or would not act in this context? But as my sister-in-law once remarked after I used this phrase (who am I to judge?): "Come on - you are all about the judging!"

So here goes...the casket angle smacks of literary gimmickry as does Delia's insistence on watching, and recounting in graphic detail, an autopsy of a recently deceased nun for her forthcoming household guide. Equally confounding is Delia's desire, which she acts on, of having her photo taken in the coffin, martini in hand or, more absurdly, the making of blood sausages using her own blood as a final gift to her family and which she stores in her freezer. Thankfully she tosses the sausages before her family finds out what she has done but not before telling her bewildered mother Jean.

I am not sure if I believe that these are the creditable responses that a terminally ill person would have or whether this is merely a literary device which is being used to spice up the narrative.

Literate, cultured Delia debates what she will be reading at the end...invariably, all the cliched titles with "death" and "dying" come to mind such as As I Lay Dying. She decides on poetry, forgoing the literary classics, the 19th c. tomes, the artsy references to death.

And she decides an important part of going is...letting go. Stopping the lists, the future instructions, controlling outcomes...letting the family deal with it as they see fit.

Adelaide excels when she recounts honest moments of fear and anxiety between family members coping with the forthcoming death of Delia but not when she ventures into surrealistic scenarios to be milked for pathos or comic effect (it's hard to tell which). The story has enough drama: Delia is the relatively young mother of two with a terminal disease and is trying to write an account of how to die with honesty and awareness. How much more drama does the reader need? Not much more.

With thanks to Barbara Bower for the review copy from Penguin Books.
Posted by A Lit Chick at 8:34 AM

I attended a funeral for a teenaged girl once where they provided markers and all her friends signed the casket during the funeral service. It was macabre and disturbing.

Great recap, not sure I want to read this one though . . .

Yes, it left me conflicted ... I realize I am very conservative about this issue.