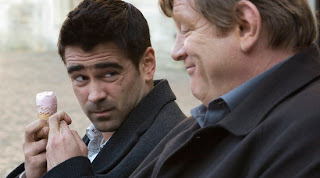 In Bruges (U.K., 2008) Written and Directed by Martin McDonagh

Despite the embarrassment of asking for a movie ticket for "In Brew-gez" and realizing how I badly I mangled the name of the Belgian city of Bruges (should be pronounced more like "Brew-zsh"), I enjoyed this movie a great deal.

Ray (Colin Farrell) and Ken (Brendan Gleeson), respectively inept and adept contract killers, are banished to the Belgian city of Bruges after a hit goes awry in London and are asked to await instructions from their volatile and psychotic gang leader Harry (played with spitting mad accuracy by Ralph Fiennes).

Ken, albeit an experienced killer, is surprisingly a cultured, intelligent man and is enchanted by the historic medieval architecture and beauty of the city. Ray not so much, constantly and unceremoniously referring to the city as a "shit hole" and itching to get out. Ray is a nail biting bundle of neurosis with a guilty conscious and we soon find out why. He is wracked with guilt about the accidental death of a child during his first hit; hence, his banishment to Bruges by the imperious Harry, father of three and devoted to his own criminal code of honour.

Bruges is beautifully shot; we are as enraptured as Ken while he tours the churches, canals and galleries of this beautiful city. Gleason plays the aging contract killer with weary charm as he tries to look out for the near hysterical, always obnoxious Ray who is nearly destroyed by the guilt he carries.

Prowling the city at night, and bored with the traditional tourist attractions, Ray stumbles upon a film shoot in the city and meets Chloë (Clémence Poésy), a pretty if suspect cocaine dealer and sometime robber of tourists, as well as the diminutive actor Jimmy (Jordan Prentice), a unfriendly and volatile dwarf, who is working on the film. They form a hapless, volatile friendship.

Meanwhile Ken, unbeknownst to Ray, is ordered by Harry to kill Ray for botching the murder in London. Bruges, which the sentimental Harry remembers fondly from a trip he made as a child, is meant to be a last farewell gift for Ray whom Harry now deems as dispensable.

Despite his reservations, Ken is determined to follow orders and tracks down a now suicidal Ray to a public park. It would be unfair to reveal more but let's just say that Ken and Ray have their own code of honour and Harry is foiled in the end (or is he?). The spectacular ending involves the two contract killers, Harry who has rushed to Bruges to take care of the business himself, the blonde drug dealer her ex boyfriend/punk and the dwarf who are dealt with in quick succession.

Fiennes, wonderfully vicious here, is awfully reminiscent of another psychotic cockney gangster played by Ben Kingsley in Sexy Beast (2000) from a number of years ago (also a terrific film).

Not all our questions are answered which is intriguing ... for instance, why does Harry order the hit? The victim appears innocuous enough. But is he? Does it have to do with Harry's reverence for children? Does Ray survive Harry's vicious pursuit? Unclear. What becomes of Ray? Also unclear and very intriguing.
Posted by A Lit Chick at 8:31 PM