Schrödinger's cat or ... a serious man 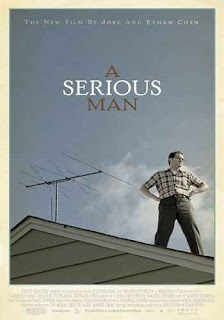 I have to admit that, sometimes, the artistry of the Coens eludes me. I see that there is intelligence and craft in the creation of the films but they don’t always work for me. I read a review once that offered a theory that they produced great films only alternately. For example, the critic offered the following examples: Blood Simple (yes), Hudsucker Proxy (no), Fargo (yes), Intolerable Cruelty (no), No Country for Old Men (yes), Burn After Reading (no)... you get the picture.

They do have an unerring instinct for selecting faces and characters that fit seamlessly in a particular and very specific world that they create. Here Larry Gopnik (Tony Award nominee Michael Stuhlbarg), is a sweet-tempered, slightly melancholic professor of physics beset by a host of maladies that would rival the plagues of Egypt in the midwest America of 1967.

The film starts with Larry presenting the following problem to his physics students which is often referred to as “the paradox of Schrödinger's cat”:


Schrödinger's cat is a thought experiment, often described as a paradox, devised by Austrian physicist Erwin Schrödinger in 1935. The thought experiment presents a cat that might be alive or dead, depending on an earlier random event … This means that there can be two different universes depending on the action taken which in this case is opening the box to see if the cat is dead or not. You cannot say the cat is alive or dead until you open the box.

A student is trying to bribe Larry into giving him a passing grade; his wife is leaving him for a pretentious friend and is pushing him to obtain a “get” so they can divorce (there is an on-going joke that most of the liberal Jews he mentions this to have no idea what he’s talking about); his children, self-absorbed teenagers with nasty tongues, are more concerned with stealing money from Larry to save up for a nose job (daughter Sarah) or having Larry fix the aerial so he can watch F-Troop (son Danny); his brother Arthur has a gambling problem and has been accused of displaying homosexual behavior in public; his attractive neighbor torments him by sunbathing nude in her backyard; someone is sending malicious letters to the university undermining Larry who is up for tenure. And … someone from the Columbia Record Club is harassing him over the telephone for unpaid bills.

So in the context of the film using the framework of the paradox Schrödinger's cat are we meant to think that, perhaps, there is an up side to Larry’s dilemmas?

Larry is puzzled and alarmed by events and seems at a loss as to how to respond (as are we the viewers). There is a sly, mocking tone to the film as if the filmmakers find the elements of modern liberal Jewish life laughable: young Danny practicing parts of the Torah for his bar mitzvah while listening to an l.p. record, the getting of the illusive "get"; the cliche of the Jewish girl saving up for a nose job; nonsensical advice from three different rabbis – each more bizarre than the last.

But it is only during Danny’s bar mitzvah (where he shows up stoned and barely able to communicate or recite the Torah as is required) that we have a sense that Larry has reached a state of inner peace. I think the message is that as absurd as the old traditions seem, they give us a sense of continuity and of belonging to something bigger than ourselves and that’s how we persevere.

Despite the absurdity of the Coen brothers’ cinematic scenarios, the intent is not frivolous – how to be a serious man, a mensch, in an absurd world? I don’t know if they succeed in providing an answer … the ending is cryptic and odd as you might expect from the Coens. The film almost requires that you understand these concepts (basic physics and concepts of masculinity in the Jewish faith) before one can begin to comprehend the film. Should I need to run to a dictionary or the Internet to understand what they are talking about here… then again, what’s so bad about that?
Posted by A Lit Chick at 9:06 AM

I am glad to hear someone else feels this way about the Coen's.

This is so exciting, I look every day to see what is coming next!

Thanks Cheryl - this is tough, a review a day ... yikes. A bit stressful! But I really appreciate your reading the blog.