An Education of sorts 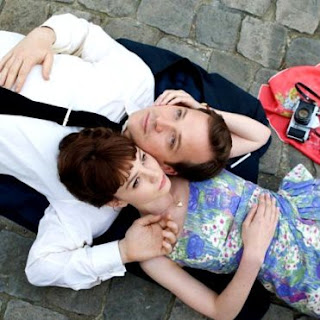 Nominated for Best Picture,  Best Writing (Adapted Screenplay) and Carey Mulligan was nominated as an "Best Actress in a Leading Role"

I was wondering what I could do to acknowledge Oscar season, having seen a few of the nominated films. I dared myself to print a review a day until the Oscars on Sunday March 7th. I will cheat a bit and include some previous reviews I have written. I will not be doing Avatar or The Blind Side. Sorry I cannot go there ...

These are the films I want to tackle in alphabetical order: An Education, A Serious Man, A Single Man, Bright Star, District Nine, The Hurt Locker, Inglorious Basterds, Julie and Julia, Nine, Precious and Star Trek. Eleven films in eleven days. These reviews will be short and sweet I hope.

An Education is quiet and surprisingly affective little film based on the memoir by Lynn Barber. Jenny (Carey Mulligan) is on the cusp of her 17th birthday and finds herself charmed and eventually seduced by the much older David (Peter Sarsgaard), a somewhat glamorous and mysterious figure who just pops into her life one day as she is walking home from school. Obviously he has had his beady little eyes on her for some time.

Jenny's goal (preordained by her parents) is getting into Oxford University. But she is sidetracked by the slightly seedy glamour of David's lifestyle: weekend trips to Paris, attractive if somewhat morally dubious friends, an appreciation of literature and art, his real estate dealings. Her normally conservative parents played by Alfred Molina and Cara Seymour are easily taken in by David who does his utmost to charm them.

She soon learns the insidious truth (wife and child just around the corner, real estate dealings involving moving in black families into a neighborhood to force out the racist old biddies then buying up their property, stealing art from posh houses on sale). But by then Jenny has sacrificed a year and the opportunity to go to Oxford.

She recovers, thankfully, but only just and no thanks to her bedazzled parents who willing lead their lamb to slaughter. Reading an article written by Lynn Barber, I was relieved to learn that in real life, she wasn't quite so taken in as the Jenny character. She seemed to understand better what she was getting into and seemed to be going along for the ride, that is until she found out about little wifey wherein she bailed. It makes her seem more morally culpable but also less stupid.

Carey Mulligan has an entrancing face - one that slips easily from schoolgirl innocent in a private school to sophisticated young lady with an Audrey Hepburn up do, a convincing French accent and a knowledge of Camus. She enchants. The intelligence and emotion radiates out of her.

Saarsgard, although not a particularly dashing figure appears to fit the bill. The real David was short, a little pudgy but immensely charming. And his British accent here ain't bad either. We see several leading British actors in roles we have not seen them in before: Alfred Molina as the blustery dad; Rosamund Pike as the beautiful but ditzy party girl Helen and Emma Thompson as the brittle head mistress of the school who blithely reprimands Jenny for pointing out that Jesus was Jewish after the headmistress objects to David's ethnicity.

You may remember Lone Scherfig as the screen writer of the little 2000 Danish film Italian for Beginners. Surprisingly for me, the script here was written by Nick Hornsby and he registers a very light touch and captures the snotty/vulnerable tone of a teenager soon to be young adult in Jenny's voice.

But I actually enjoyed reading Lynn Barber's account of what really happened as she details it in a recent Guardian article more than the film because her real life experience is more complex and she is more culpable than it is played here in the film.

But then again, with the film, we get the feeling of claustrophobia of Jenny's life in her cloistered, prescribed little world where every step is planned and worked out in advance by her parents which, I think, explains this streak of rebellion and obtuseness towards David. And ... we get the great 50s clothes!

An Education won the Audience Choice award and the Cinematography award at the 2009 Sundance Film Festival.
Posted by A Lit Chick at 9:27 PM

I just love your blog! Think I am going to have to see this one.

Thanks Cheryl - Mulligan is divine (truly).