It's Edith's War and Our War Too 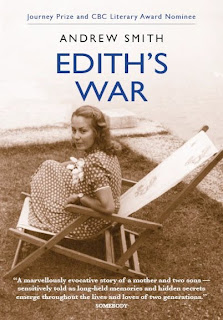 In Edith's War, Andrew Smith sensitively and deftly shifts from the present day somewhat strained relationship of two brothers named Will and Shamus Maguire traveling in Venice to the secret history of their mother Edith during WWII when countless Italians, some born in England, were interned as enemy aliens. I was lucky enough to read this book in manuscript form before it was published.

The Liverpool born brothers could not be more different. The eldest Will is taciturn, cold and unsociable. Shamus, a few years younger and now living in Canada, is gentler, sensitive but obviously a bit cowed by his older brother's volatile personality.

Shamus is still mourning the death of his partner Luke. Will is divorced and seems embittered by his life. Both men seem emotionally adrift. They spend the day reminiscing (and bickering), taking in Venice and awaiting their mother Edith's visit. Family life was an emotionally stilted and unpleasant memory for Will. Shamus has a less angry recollection but is still intrigued by the speculation of the true relationship between his parents Edith and Joe (whom both brothers refer to by their first names).

The two generations are bound together by their connection to Italy and it turns out Edith's romantic past is much more complicated than they know.

Far from being the cold, prim fish that the brothers presume Edith to be, she has had a tumultuous emotional and romantic history in Britain during WWII while husband Joe was off to war and she was pregnant with her first child Will. While Edith lived with her mother-in-law and brother-in-law she became friendly with the Baccanello family next door.

Anna and Gianni Baccanello have three sons Carlo, Paolo and Domenico and a close relationship with the Maguires. There is a sweet and understated attraction between Edith and the eldest son Carlo who lives with his wheelchair bound wife Isobel.

This attraction becomes more intense when all the Baccanello men are interned as aliens and possible threats to security by Churchill's orders once Mussolini declares war on England in 1940. This reflects a true historical event that few in the West know about (I certainly did not). Edith, intelligent but politically apathetic, is galvanized into aiding her neighbors when the the men are interned and then ordered to be transported overseas for indefinite incarceration on The Arandora Star.

On July 2, 1940 the ship, which held nearly1,200 German and Italian internees, was torpedoed by a German submarine U-47, and 800 men were killed or drowned. Carlo survives this harrowing experience as does the youngest son but other family members do not.

Even though Carlo survives, his ordeal is not over as he is then shipped to an internment camp at Woolfall Heath. Some historical detail about the camp from "Wartime camps in Huyton", BBC Liverpool:


The camp, first occupied in May, 1940, was formed around several streets of new, empty council houses and flats and then made secure with high barbed wire fencing. Twelve internees were allocated to each house, but overcrowding resulted in many sleeping in tents. Initially the camp was only meant to hold the internees until they could be shipped to the Isle of Man. However, largely in response to the torpedoing of the transport ship 'The Arandora Star', with the loss of nearly 700 people, the deportations ended.

Brave, resourceful Edith stands up for the Baccanellos against British authorities and struggles largely in vain - even combating her bigoted brother-in-law and the suspicion of neighbors and friends in their small village. But she makes a fateful choice which will link her to the Baccanellos forever.

It reminds me that we often lose sight of what our parents were before they became our parents - their acts of courage, their youthful passions and sometimes transgressions. They were (are) as passionate and hopeful as any of us.

In the present day, the Maguire brothers bicker and piece together bits of forgotten family history in Venice. They meet an enigmatic stranger named Armando Belli who captivates Will. He carries a cigarette case which intrigues Will and triggers a long buried memory about the presence of Carlo Baccanello in his early life. Without saying too much to spoil the plot, a secret resides in Edith which we learn of only at the very end.

The scenes set in WWII are compelling and meticulously recreate the atmosphere of fear and paranoia which plague the two families under siege by both the German bombardment and English racism and xenophobia.

This book is politically relevant today as it reminds us that the perceived enemies within our midst are often the pawns of horrific historical circumstances beyond their control. And before we assume that this is a phenomenon confined to other nations, let's remember that the exact same situation happened with Japanese-Canadians during WWII. My own mother-in-law, who was a child younger than my daughter, and her whole family, were interned at Lemon Creek. Closer to our own time, think of the Muslim-Canadians wrongly accused and incarcerated today. We are doomed to repeat these mistakes unless we are vigilant. And this book helps us remember that.
Posted by A Lit Chick at 10:56 AM