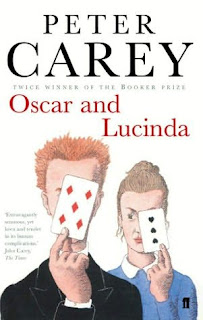 "You do not fit ..." Oscar is told by a friend, not unkindly, early in the book. It is true, neither Oscar nor Lucinda fit anywhere which is probably what brings them together. They are the proverbial square pegs in round holes in Australia in the 1860s. But, oh, how Carey makes us wait - until about page 200 or so until our two protagonists finally meet on a boat.

Carey is a wonderful writer of historical fiction (see my review of True History of the Kelly Gang) but my concern is the layer upon layer of historical detail that, while creating a rich and believable back story for the characters, makes for a challenging read and delays progression of the plot and, ultimately, reader satisfaction. His style is described as "Dickensian". As the husband once snorted about the esteemed Dickens himself, "They paid him by the word for his work and it shows."

I felt this excess in detail to be the same with the Ned Kelly book as well. I wanted to read about the bandit's exploits but got a great deal of well constructed, realistic back story for hundreds of pages when I was itching to get to the most interesting part of the story (i.e. his banditry). That's why I nearly tossed the book aside in frustration.

Yet there is something magical and subversive in Peter Carey's work: the stockinged feet of a Victorian gentleman under the table in the folds of a gown of proper lady that he is playing cards with; the widow who shows her potential suitors risque photos found on her husband's slain body and determines who might be a fit lover on the basis of this; Lucinda's unladylike obsession with gambling, with being around working people; barely glimpsed carnal relations between two craftsmen which is never mentioned again ... just the odd little detail which unsettles the reader a bit and then the narrative carries on. It's that odd combination of convincing historical detail spiced lightly with something naughty that keeps propelling you forward as a reader.

Oscar is a religiously minded gambling addict. Lucinda is an orphaned heiress with unruly hair who owns a glass factory and has her own gambling "addiction". They meet aboard a ship. Oscar has come from England. Lucinda, a native Australian, is traveling to Sydney. They come together and break apart over an innocent game of cards because neither knows that the other is a gambling addict and fears the other's condemnation.

One hundred pages later (truly around page 300), Lucinda is disappointed in love, lonely and unhappy, and finds herself in the Chinese quarter of Sydney in some sort of betting salon, the lone woman amongst a number of men. And there is Oscar, once again, in the midst of things. The two are face to face with what they really are and they are not ... displeased.

Oscar serves as a minister within his own modest church in Sydney. Lucinda runs her glassworks. At night, they play cards in the parsonage, that is, until they are spotted by a prudish parishioner. Oscar's reputation is ruined; he is thrown out of the church and literally ends up on the street. Lucinda takes him in and he lives a chaste, humble life within her spacious home. She finds him a job. They care for her home together as no self-respecting maid will work for Lucinda as they assume that the couple are living together "in sin".

Round about page 400 they realize they love each other but Lucinda, out of fear of rejection, has pretended that she loves another so Oscar's hopes for love seem unrequited. Oscar imagines a fantastic plan to build a church out of glass which he hopes will please her and offers to supervise the whole venture. The church will be in the parish of the man that he thinks Lucinda is in love with.

I think around page 430 or so they have a physical relations (I am unsure - the language is obscure, poetic, there is mention of an engorged organ).

If you truly want to know the ending, contact me!
Posted by A Lit Chick at 9:52 AM