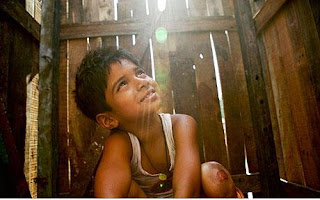 I resisted this film for a long time ... I'm not sure what put me off. Director Danny Boyle? The perceived sadness of the topic? The poverty of India? It did incredibly well at TIFF. People were raving about this film and I felt I had to see it. It did not disappoint.

In Mumbai, three orphaned children Jamal (Dev Patel), his older brother Salim (Madhur Mittal) and their friend Latika (Freida Pinto) navigate a difficult childhood filled with scheming opportunists and sadists who try and exploit the children. They almost succeed in destroying all three.

The children are subjected to the worst imaginable horrors: poverty, destitution, preyed upon by the mercenary, hunger, exposed to the elements, absolutely horrific circumstances, portrayed in extremely realistic detail. But India, even amongst this degradation, somehow appears beautiful, vibrant, astonishing. I finally understand how people come to utterly love this country despite all its troubles.

Through a series of incidents, they are separated and divided and grow into unhappy adulthood.

Salim, the tougher of the two, eventually becomes a gangster's minion after stealing Latika away from his brother Jamal. Latika becomes the submissive moll of a vicious, sadistic gangster. Jamal, a self described slum dog, working as a "lowly" tea server to tech support workers in a large multi-national in Mumbai, decides to enter an Indian version of the game show "Who wants to be a Millionaire?" and to his surprise wins millions of rupees. His objective is to attract the attention and love of Latika, convinced that all of Mumbai is watching this show. They are.

He does win her - but he also raises the ire of the host, a previous contestant winner convinced that Jamal is a cheat and he sics the police on him, who torture him to try and get him to confess to no avail.

I will not spoil the ending but I will say that the entire package is mesmerizing: the acting of these three relative unknowns, the music, the cinematography, the rapid, artful editing, the colours of Mumbai, the beauty of the young actors played by three different sets of actors for each of the three main characters.

Utterly amazing and satisfying. It deserves all the accolades it has been receiving.
Posted by A Lit Chick at 7:55 PM