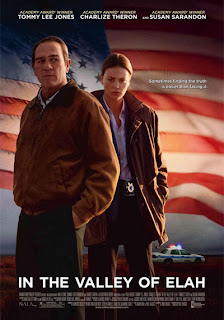 Military films are not my thing nor is Tommy Lee Jones one of my favourite actors. I usually avoid them (and him); however, I like the Canadian born director Paul Haggis who was the director of Crash (2004) and the screenwriter on Million Dollar Baby (2004) and I thought that he might have an interesting twist on this story based, as they say, on actual events.

Hank Deerfield (Tommy Lee Jones), a career officer, returns to the military base from where his son Mike has gone AWOL to investigate his disappearance. He encounters not only resistance but subterfuge and apathy particularly when Mike's body is found on a roadside near the base, shot 42 times and burnt almost beyond recognition.

The military is anxious to portray Mike as a soldier gone bad once he returned from Iraq, a crystal meth addict and general hothead. The local police are just relieved that it is out of their jurisdiction.

Deerfield manages to solicit the support of Emily Sanders (Charlize Theron) a young female detective who is consigned to investigate cases that are deemed the lowest of the low in the police squad room (i.e dealing with reports of psychopathic ex-GIs drowning their dogs and disgruntled factory workers torturing chickens) because it has become common knowledge that she had a relationship with Chief Buchwald (Josh Brolin), her commanding officer.

What they discover together shocks and sickens both of them. No one is blameless, not Mike's commanding officers, nor the military police, Mike's fellow platoon members, or even Mike Deerfield himself, who emerges as a troubled, angry boy desperate to leave Iraq and clearly unhinged by what he saw and did there.

The phrase "in the valley of Elah" refers to the place where David slew the giant Goliath in the biblical story, which Hank repeats to Emily's son. Here the metaphorical David, who is perhaps Hank Deerfield, could not conquer Goliath (the military) but only hold it a little accountable. or perhaps it is Det. Sanders who, despite the abuse and ridicule she receives, manages to learn the truth of Mike's death.

At one point in the film, Hank reprimands the janitor of the local school for hanging the U.S. flag upside down on the flagpole outside the school telling him that that is a universal sign that there is a crisis or emergency in progress. By the film's end he returns to that school and raises the flag again, turning it upside down himself, heartsick and nearly destroyed by the knowledge surrounding Mike's demise.

This is a wonderful film with enough cynicism and subversion of patriotic ideals to satisfy any filmgoer who questions the Americans' role in Iraq.

Here is what the New York Times has to say about it.
Posted by A Lit Chick at 6:56 PM