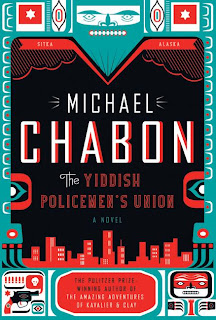 I am starting to resent this talented writer: young(ish), prolific, learned, imaginative, first published at 25. A writer's worst nightmare. This is an inventive detective/whodunit story with an interesting twist.

The language here is funny, profane and inventive: "Landsman [our hero] can hear them talking about him in the hushed tones reserved for madmen, assholes and unwanted guests."

Imagine a Jewish refuge in the state of Alaska after the imagined collapse of the state of Israel in 1948 in the aftermath of the Holocaust. A Jewish community thrives in the Sitka District of Alaska (a real place in Alaska) - street and hotel names, Jewish rituals, the Yiddish and Hebrew languages spoken, Jewish cuisine - all remain intact in the new world after two million Jews emigrate to the state. It is a completely realized world inhabited largely by Jewish refugees, their descendants and Tlingit Indians.

But there are disturbing rumors that the Jews will be forced out of Alaska due to their burgeoning numbers. This is ominously referred to as "The Reversion" of Alaskan territory to the United States perhaps anxious to rid itself of this group.

Enter Meyer Landsman, a homicide detective, a shammes, middle-aged, melancholic and miserable (do these words always have to go together?). Chabon is very witty with his use of Yiddish and Hebrew and incorporating it into this fully realized world. The original meaning of "shammes" is a sexton in a synagogue but here it sounds very like "shamus", American slang for police officer or private investigator. A gun is a "sholem" (literally meaning "peace" in Hebrew, which sounds exactly like "piece" or gun in street slang). Very clever stuff.

Landsman encounters the death of an apparent junkie who was shot in the head in the Zamenhof hotel, the same fleabag hotel that he resides in. Mendel Shpilman, who was living curiously under the alias of a chess genius, was a known heroin junkie who was so talented that he played multiple games of chess at the Einstein Hotel for spare cash.

The more Landsman digs into the case, the more intrigued and disturbed he becomes. Shpilman is the son of a Verbover rebbe (Verbover being a certain type of Hasidic Jew). The elder Shpilman is also Sitka’s most powerful organized crime boss. Mendel was a child prodigy at the game of chess and the reputed Tzaddik Ha-Dor (the Messiah or "righteous man of his generation"), said to perform miracles. He disappeared on the day he was to be married. We soon find out why.

Landsman's commanding officer Bina Gelbfish, who is also his ex-wife, warns him off the case as the vic's father is a very prominent member of the Verbover community. Even his first cousin and partner Berko (intriguingly half Jewish/half Tlingit Indian) is nervous. Yet Landsman persists in the investigation.

Here the somewhat mysterious death of Landsman's sister Naomi Landsman, a bush pilot, collides with the disappearance of the once professed to be Messiah Mendel Shpilman. Before her death, Naomi had flown Shpilman to Peril Strait - a set of mysterious buildings set up by Jews outside the Sitka District. At first glance, it appears to be, alternately, a drug rehab center, a farm or a military training camp where Mendel might have been seeking treatment for this addiction.

Obviously on to some shady business involving Mendel's death, Landsman ends up at Peril Strait to puruse this. He is threatened, beaten, stripped, locked up and somehow escapes half naked and shackled to a wire frame of a mattress to join his cousin Berko who has followed him there.

Together they uncover an international plot which involves both the return of the Messiah to Jerusalem and the death of his sister.

I actually spelled out more of the plot here until I realized I was revealing too much of the story ... I was puzzled and disappointed by the ending. It seemed too flat. The resolution of Mendel Shpilman's homicide is neither as eventful nor as satisfying as I imagined from this artful book.

But I think we are dealing with a major talent with a vast and encyclopedic knowledge. And being a typical writer I am both gratified by the quality of his work and supremely jealous.