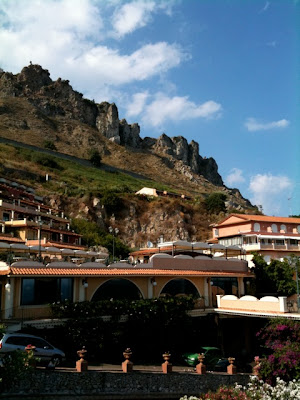 View of the hotel from the walkway to the pool
Il sangue chiama literally means “the blood calls” … and it usually refers to familial relations that cannot be broken, to people that you cannot tear yourself away from because of your blood connection but here I mean it as the call that your history and people make to you that you can’t resist. 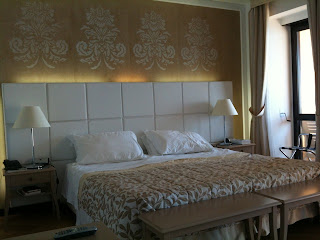 As I type this I am looking over a balcony at the Baia Hotel Taormina that faces the Baia Taormina; a number of mountains are to my right and an endless horizon of sea to my left. R spots a rabbit and its baby hopping from one scrap of shade to the next in the gold and green brush below the balcony. The heat is so intense that there is no one on the beach and few meandering about. If I showed you the pictures you would not believe how gorgeous this part of the country is. Carved into a mountain beside the sea, the landscape is wild and a little dangerous looking with serpentine roads that curl and twist across the landscape from one small patch of “civilization” or hotel to another. 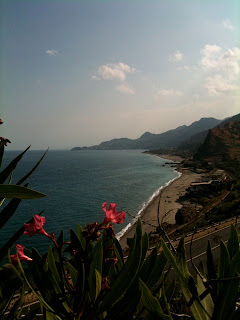 Despite my pretty little speech to J in Rome, I feel that the Romans are not truly my people, not my true ancestors … my people came from land like this: rugged, wild, dangerous, difficult to navigate, full of secrets like the hidden crags in the mountains.

I love hearing Sicilian spoken between the vendors on the streets and that the face of a waiter here reminds me of a particularly handsome cousin or uncle I have. I like to think of Giuliano and his men hiding in the hills of this island from the carabinieri in western Sicily on the other side of this island.

You know how they say in Hollywood that even the cops and the salesgirls are beautiful because of all of the gorgeous people that came to Hollywood and procreated? It’s a little like that in Sicily... The face of the car rental agent or the hotel maid can absolutely knock you out with its beauty. And the physical types vary so greatly in hair colour and skin hue and physical type.

Taormina is prosperous and proud of it. The little streets of the town centre are immaculate and the shops are (for the most part) not inexpensive. It is pristine and carefully maintained which is bit of shock after the chaotic energy of Firenze and Rome, full of beautiful if decaying ruins at every corner, a glut of sweaty tourists and irritated Romans and Fiorentines. Down the main “street” of the Taormina shopping district, which is almost like an extra wide alleyway between buildings the colours of pink, lemon, pale orange and peach, if you look left or right, there is another narrow pathway ascending up to another store or restaurant with pottery or jewelry or clothing or perhaps Sicilian kitsch.

This kitsch may be Godfather souvenirs, various symbols of the Trinacria, pottery, gladiator marionettes, cheaply made ceramic tiles and plates, gaudy fans, paper umbrellas or parasols to ward off the sun, but sometimes expensive antiquaries like prints and silver, paintings, and religious iconography. But I do like the Superman style T-shirts which say “Super Siculo”. Here is a descritpion of the origins: Siculo-Arabic (or Sicilian Arabic) was a variety of Arabic spoken in Sicily, Malta, and Southern Italy between the ninth and the fourteenth centuries. It is extinct in Sicily and Italy, but it has developed into what is now the Maltese language on the islands of Malta.

Driving in from Catania and the trip in from the airport was a bit harrowing. This was the thing that I dreaded the most in anticipating this trip – the car ride from Catania to Taormina - which is relatively short (about an hour). R and I were trying to navigate Sicilian style driving, an expensively rented car that we had to pay a premium for because we can only drive automatic (which are rare here) and a GPS system that we have never used before. It is a heart attack in the making on four wheels.

R said his heart was pounding and, for my part, my clothes were drenched in sweat – the motorcyclists and the scooters are absolutely fearless (or insane) here as they charge past you on the left and right recklessly trying to get ahead of everyone else between the racing cars. A red traffic light seems to be the sign for “go faster before someone tries to cross the street”.

The address we were given for the hotel was not correct so we spent some time trawling the roads of Taormina searching for the hotel. The address we ended up at was a derelict looking faded pink building that was shuttered and dirty and looked abandoned. No answer when I picked up the heavy, blackened knocker and tapped. My heat sank. Was this to be like our hotel in Rome? Finally a local in a heavy Sicilian accent at a nearby restaurant pointed across the bay and said to go there…some ten km. away. She was right. The hotel is just outside of Taormina in an even smaller town called Sant Alessio.

The kid and the husband were mighty impressed with the hotel as the last one was such a disappointment and I’m glad I let the travel agent talk me into it. J took one look at the room and said, “Now that’s more like it!” We walked the grounds after we unpacked: a spacious courtyard, two beautiful pools, a room that faces the sea with a spectacular view, a spa, a shuttle to Taormina, a large terrace.

We took the hotel shuttle at 6.00p and were dropped off on Via Luigi Pirandello in Taormina. We walked along the main strip looking for somewhere to eat. We found a little place called Pizzeria Ristorante Rosso Gambero (Red Shrimp) where we had antipasti, pasta carbonara and R had meatballs cooked between lemon leaves (it looked quite pretty actually!). Of course this had to be topped with gelato and as we walked back towards the shuttle we saw my sister F and her boyfriend T who had arrived from Trapani on the west coast of the island that day.

What a great surprise…we were to meet her here but I wasn’t anticipating seeing her on the street. She had flown in to Trapani, traveled to Palermo and back to Taormina all in the same day – basically traveled the length of the island. We shared a coffee and more gelato at a little café before parting. She was staying at the Hotel La Pensione Svizzera which is, coincidentally, also at Via Luigi Pirandello, 26. J had a cannolo at a pasticerria before we left for the hotel – better than the Hamilton cannoli we all love she said with confidence.

We caught the shuttle back at about 9.30p. The streets are very dark and winding at night. The trip takes about fifteen minutes. It reminded me a bit of taking a roller coaster in the dark – yikes – not my favorite thing to do. J just kept saying, “Look at me Mama, don’t look at the road!” to assuage my anxiety.

Tomorrow we find bathing suits for J and I, which I foolishly forgot to pack, and take a cable car down the mountain side the beach – coraggio Michela corragio! 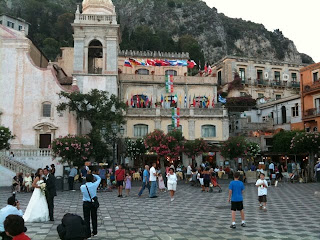 A wedding couple poses for pictures in
Piazza Garibaldi in downtown Taormina.

P.S. With thanks to my cousin Michela La Rocca, a native Sicilian, for her gentle correction of my Italian.
Posted by A Lit Chick at 9:24 PM