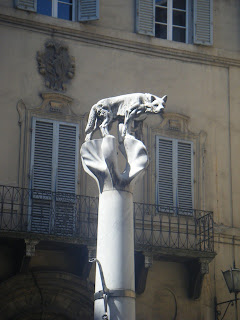 Siena is closely linked with Rome; hence, the many images of Romulus and Remus
suckled by the she-wolf which is a central myth of the origin of Rome.
Today we went on an excursion for which we had a private driver and a mini-van courtesy of our multi-talented travel agent Vittorio. Siena is one hour south of Firenze and the home of Il Palio, a semi-annual horse race in which ten of the contradas of the city compete.

The city is divided into seventeen sections or contradas, each with its own flag and emblems. The Palio is held in the middle of the city in a long circular enclosure surrounded by buildings and the watching crowd gathers in the middle section. The race is run in a circle around a crowd of approximately 7,000 according to our guide/driver Marc.

We missed the Palio by one day; they were cleaning up the day we went. It was the 750th anniversary of the event. The Selva (forest) Contrada had won. Siena is divided into seventeen Contradas which correspond to seventeen areas of the town. The names of the Contradas are: Aquila (Eagle), Bruco (Caterpillar), Chiocciola (Snail), Civetta (Owl), Drago (Dragon), Giraffa (Giraffe), Istrice (Porcupine), Leocorno (Unicorn), Lupa (She-Wolf), Nicchio (Shell), Oca (Goose), Onda (Wave), Pantera (Panther), Selva (Forest), Tartuca (Turtle), Torre (Tower), Valdimontone (Ram).

That day, we saw a small parade of the Selva Contrada’s inhabitants dressed in vaguely medieval costumes and leotards bearing the colours of their Contrada: brilliant green, white and orange with the emblem of a rhinoceros on its flag. The men played drums and pipes and were followed by a troop of women, children and men wearing scarves with the same colours.
Siena is very pretty and obviously wealthy and makes Firenze look like Toronto in terms of multi-cultural diversity. At least in Firenze you see Hispanic, Asian, African and Arabic people who are the vendors and service personnel of the city. Siena's inhabitants and tourists are almost exclusively white. The shops are expensive and upscale and the streets have a pristine cleanliness that reminds me a bit of an exceptionally clean amusement park – no garbage, no drama and very few garbage receptacles. Therefore, it also made me a little uneasy despite its charm. 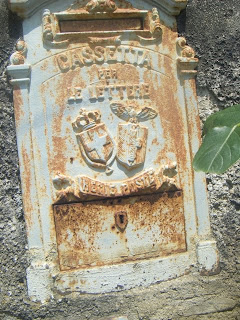 We left Siena for la Fattoria San Donato. This farm/winery was built in 1100 AD – in an absolutely stunning locale. It also rents apartments to tourists. We did a tour of the cantina where they store the wine and had a “light lunch” Italian style under a canopy in the beautiful countryside reserved for guests such as us. “Light” meant: penne pasta con succo, marinated funghi, sliced pecorino cheese and Italian cold cuts, marinated peppers, barley and tomato salad, crostini, red and white wine, cantuccini (small biscotti) and a dessert wine.

Above is a photograph of a mail box once used by the fattoria many many years ago.
We were reluctant to leave but had planned to go to San Gimignano, a small medieval fortress-like Etruscan village which is forty five minutes south of Firenze. At first you think how beautiful and well preserved it is but then it seems really disturbing – Disneyland clean and organized with no sense of who really lived there – no history evident just touristy shops, some expensive, some with just tacky souvenirs and a “torture” museum.

Were R and I the only geeks who wanted to have sense of what this place was about – who lived there, how this fortified village survived? By then, the 38 degree plus weather had worn us out and we decided to opt out of wine tasting in Chianti as nice as that would have been – I am sure that the kids could not have borne one more trip. 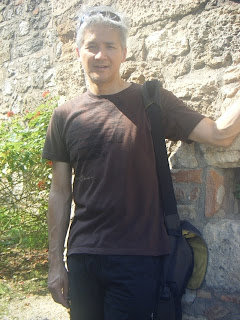 While at San Gimignano the girls made a great video.


Our friends found another great little restaurant I Ghibellini – large, homemade pizzas, calzones and pasta per tutti! How blessed we felt last night to be sitting there with good food and good friends in this beautiful setting.

R said that he could see himself living here in Firenze. A small triumph for me. Two winters ago he refused to consider the idea of living anywhere else but Canada. Today he was looking for apartments to rent!

This a picture of R at San Gimignano ... a friend said that it looks like he is ascending to heaven. How appropriate!
Posted by A Lit Chick at 10:11 PM

R looks like he's being taken up to Heaven.