Day 6: In the Temple of the Gods 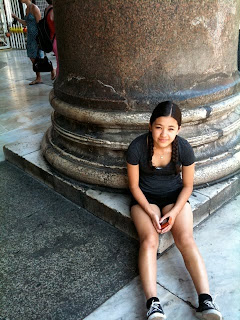 We walk to the Pantheon from the hotel, which takes about 30 minutes, and is not far from the Fountain of Trevi. It gives me a chance to examine the natives, both male and female. The upscale Roman female is a surprise for me … deeply tanned, harshly made up, stick thin or thin-ish, very stylish if loudly dressed with a cell phone permanently affixed to her ear and moving very fast across the pavement.

The male of the species is equally stylish: three piece suits in 40 degree weather, designer sunglasses and great leather shoes – also looks amazing on a scooter or motorcycle. The glamorous Roman style is definitely a reality amongst a certain group of affluent people.

At the Pantheon (J is pictured sitting here at one of the massive columns), we encounter two “gladiators” yukking it up with the tourists. They immediately ensnare us – they place a helmet on little eleven year old A’s head, and a plastic, rhinestone encrusted tiara on the resistant13 year old S then insist we take pictures with them where they appear to be spearing A through the stomach. Then one sticks out his palm and says “5 euros”. I say for what? For the picture, he says. Five euros EACH he adds. While we are processing this he shoos away an older Roma woman dressed head to toe in a long black skirt and kerchief begging for money and barks in Italian to her, “O, lavoro qui!” (Ohhh, I am working here!).

The attitude toward the Roma is very unpleasant and obvious especially among the scam artists on the street. You should see the travel tips we received about watching for the swarms of “gypsy” children who might steal your wallet.

V, mother of the two kids, starts to negotiate the price down with the bigger of the two “gladiators”. I’ll give you fifteen she says. He grumbles but accepts. He’s lucky that it wasn’t my kids because I think I would have told him where to put his plastic sword.

We walk into the Pantheon, once a temple for the Roman gods, built in the 2nd c. AD then co-opted by Christians and elegantly plastered with religious iconography (admittedly it is beautiful). The kings Umberto I and Victor Emmanuel are buried here as well as the painter Raphael. The circular aperture at the top lets the sunlight in so that it hits a certain portion of the Pantheon every hour then slowly moves around the circular room resting on various paintings and sculptures. The effect is quite beautiful. 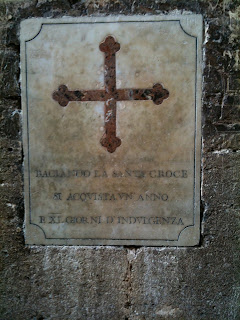 After lunch we go on our three hour tour of the Colosseum and the Roman Forum – three hours in the broiling sun. Rome is an inferno this day! Our guide Stefano, whom I believe is likely a German, is excellent – funny, articulate and knowledgeable – engaging all of us, children and adults alike. 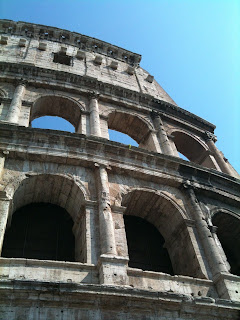 We learn things we had never known about the Colosseum: how the barbarians who attacked Rome removed the metal rods from the stone columns that support the building (which were there to withstand earthquakes) and melted down the metal for weapons; what food the people ate as snacks during gladiator games (nuts, fruit, chicken!) and the graffiti they wrote; that there is no documentation proving that Christians were slain at the Colosseum; a primitive elevator operated by levers lifted elephants and lions into the Colosseum; so many lions were slain that they became rare and extremely valuable in Rome; that the gladiators had to enter the Colosseum by underground tunnels because they would be thronged by fans and the Roman equivalent of puck bunnies at a hockey game. Classy act that a portion of the tour group is, two young punks slowly smoke their cigarettes during at intervals during the tour. 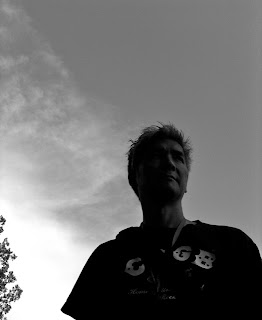 One thing the Christian Romans were very adept at was "re-branding" the pagan edifices - pictured here is a plaque installed at the Colosseum presumably acknowledging Christianity or the Pope's influence much much after it was built. It was a surprise to see it there as construction started between 70 and 72 AD. At right, R standing before the Colosseum (picture taken by J).

Across the street from the Colosseum are the remnants of the Roman Forum – the Roman Senate; the place where Caesar’s corpse was cremated; great arches commemorating emperors. It’s a strange space, some buildings are entirely intact; elsewhere, bits of columns and stone lay about in piles as if the Romans have no idea what to do with them. Will they try and assemble them or are they loathe to remove them because of their historical value? R also notices columns and bits of stone by the sides of the road. I found this explanation on-line:

The Forum was the marketplace of Rome and also the business district and civic center. It was expanded to include temples, a senate house and law courts. When the Roman Empire fell, the Forum became forgotten, buried and was used as a cattle pasture during the Middle Ages. Much of the forum has been destroyed. Columns and stone blocks are all that remain of some temples. The Arch of Titus and the Arch of Septimius Severus still stand and are in good shape. Like many other ancient Roman buildings, stone blocks have been removed from the Forum and used to build nearby churches and palaces.
Excerpted from www.ancient-rome.tripod.com 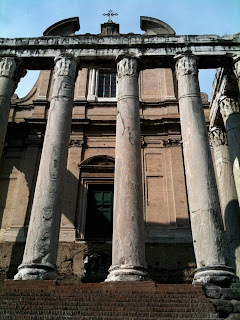 To the left is the Temple of Antoninus and Faustina, one of the best preserved buildings on site. After the death of his wife Faustina, the Emperor Antonius Pius built a temple in her honor in 141 AD. It was converted in the Middle Ages into the church of San Lorenzo in Miranda.

On the last stop of the tour, we are taken to Piazza Venezia, which is dazzlingly white and immaculate, peopled with gigantic sculptures by Michelangelo. The steps are vast and impressive and our guide walks us down them to the bottom. I wonder how many Romans make this trip or are they bored beyond belief by their history by now?

From the sublime to the ridiculous ... there is no time for shopping until tonight. There is a shoe store on Via Sistina that has caught my eye. I ask 14 year old S, who is as obsessed with shoes as I am, if she and her mom would like to come. J, who has not entered into the girly girl phase yet (or perhaps ever)  demurs. Every time we pass a shoe store S and I turn to each other and say “Shoes!” I find three pairs for 32 euros in total: one cloth pair of flip flops with cream coloured rosettes; white sandals with a flower design and black sandals with a large flower atop. Shoes! 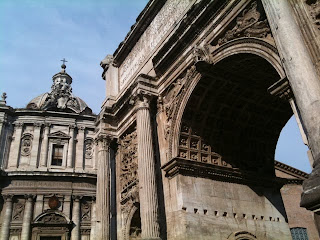 The Arch of Septimius Severus has reliefs of Septimius Severus's victories in what is now present day Iraq and Iran carved into the arch during the 3rd c. It also honors his two sons, Caracalla and Geta who fought with him in the war.  The Forum had been flooded, buried and forgotten for many centuries. During this time the half of the arch that was above ground was used to house a barber shop. Excerpted from www.ancient-rome.tripod.com
Posted by A Lit Chick at 10:15 PM