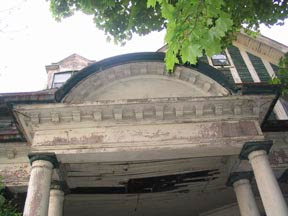 This particular house on Broadview Avenue, which I have affectionately named Miss Havisham's house (please see blog entry on May 14, 2007) sits on the corner of of our street and Broadview here in the Riverdale neighborhood of Toronto, and is now for sale. Actually, yesterday I saw a sign that said it has been sold. It has been forlorn and neglected for years. Miraculously (for me), the house was featured in the August 4th ediiton of National Post in the Post Homes section.

I spoke to the real estate agent and he told me that the owner died last summer (he was in his sixties he said) and someone, I should have been more nosy but couldn't bring myself to ask, decided to sell. Was he incapacitated? Did he have children? How long did he live there? So many questions ...

The agent said that he had a survey for the house for 1918 but my suspicion was that the house was older than that. It was used as a doctor's office with two complete apartment suites above on the second and third floor.

Yesterday, I went to the library and poured through the Toronto Directories in the Toronto Reference Library on the 4th floor. I came upon the directories by chance one time in the library and vowed I would make good use of them one day. The directories, dating back well into the 19th c., contain an alphabetical directory of citizens, and a street directory. They also sometimes list their occupations. In early editions from, say the 1890s, you will come across very simple, charming notations such as:
Noah, carpenter, 16 Baldwin Street

Or sometimes with no surname at all:

And you realize as you scan the names how much the city has changed: the Robertsons, Jones, MacDonalds, Smythes have given way to a vast array of names ending in vowels or containing many consonants which likely would have given its old residents quite a shock.

This massive house has 17 rooms, a large wrap around porch and a boarded up coach house. The paint is peeling, the wood is decayed and rotting, the roof of the porch is broken through. The windows are broken or boarded up with chip board. The entire house is completely destitute looking. The floor of the third floor is so unstable that the agent did not recommend walking on it and would not hold an open house for safety reasons. Yet she is still beautiful in her decay.

It took a few hours but I found what I was looking for in the directories. Miss Havisham's house was built in 1907. A thrill passed through me when I saw that between the house of a certain Mr. Robert Yule directly to the south of the house I was searching for and the next house north of there, there were four unfinished houses being built in 1907. The next year, it was inhabited, and presumably owned, by a Dr. John A. Gallagher, a druggist and physician who had two business addresses, one on Gerrard Street and one on King Street E. He lived, possibly worked there for at least ten years. This would make the house 100 years old.

Perhaps the history of the house has mutated a bit with time? The agent told me that a physician had once owned and rented the two units above to two boarders. Could he possibly be referring to John A. Gallagher? Or was there a later physician as well?

Good luck Miss Havisham - you deserve a family that will make you beautiful again.
Posted by A Lit Chick at 8:22 PM