Brando for the summer 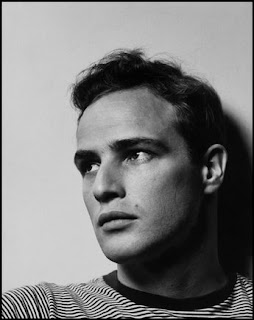 At our local pool a few weeks ago, a friend glanced at my summer reading (a hundred year old "classic") and exclaimed in a half joking, half exasperated way: "Don't you ever just read trash?" Well dear friend, in this blog entry I can cheerfully answer yes.

With the Toronto International Film Festival less than a month away my thoughts turn to cinema so on an impulse I picked up the Penguin Lives edition of Brando's biography, a truly awful book about a supremely gifted actor.

My significant other did a sort of double take when he saw the author's name. "Isn't she a hack?" R asked. After a few pages, I could confirm this. However, after battling the first 100 pages of an Orson Welles biography which could easily cure my lifelong insomnia, I put it aside and greedily took hold of this biography. Orson has defeated me!

The writer and cultural critic Camille Paglia, whom I believe to be only half crazy, has declared that Brando "mumbling, muttering, flashing with barbaric energy, freed theatrical emotion from its enslavement by words". Here she is dead on ... think who preceded him, who the ideal leading men were thought to be in the 40s: actors such as Van Johnson, Robert Taylor, cardboard cutouts without a shred of originality or passion (at least on screen).

It's easy to sneer at the person that Brando became: odd, volatile, querlous, morbidly obese. His acting choices were unfathomable at times, his children and lifestyle sometimes reprehensible. But think what he once was! Aside from his physical beauty which was substantial, there was the magnetism, charm, intelligence, sexual power, originality - all the more poignant because it seemed to lay in ruins as he aged as if he was consciously trying to destroy it. Bosworth claims that he did so because he couldn't stand the pressure of being stared at, of being admired when he felt so worthless.

Set aside his difficult relationship with his alcoholic, abusive father, his doting but damaged mother who was also an alcoholic, his lack of formal education which shamed him ... No doubt all these factors damaged him, shaped him, made him who he is. We're not on the couch now. Let's just talk about his talent, specifically in five films where he particularly shines: Streetcar Named Desire (1951), On the Waterfront (1954), The Godfather (1972), Last Tango in Paris (1972) and Apocalypse Now (1979).

Watch Brando now in Streetcar Named Desire (1951) and you squirm in your seat a bit. The velocity of his brutishness as Stanley Kowalski feels overwrought, almost hysterical, but think how revolutionary it was in 1951.

The film is ostensibly about the emotional collapse of Blanche Dubois (Vivien Leigh), a fragile Southern belle who comes to live in the one-bedroom apartment in the New Orleans French Quarter of her sister Stella (Kim Hunter) and brother-in-law Stanley. Blanche's fictitious lady-like past is blown apart by Stanley's savagery who is determined to tear her off her pedestal. But it is Brando who is absolutely riveting.

Here was a portrayal of a particular kind of working class man: potent, aggressive, and full of despair, like nothing that had ever been seen on stage or screen until Brando appeared in the Broadway version prior to this film. Finally, someone had stripped away the artificial layers of "acting" to expose the possibility of what character like this might really be like, what the relationship between two passionate but unhappy people like Stella and Stanley might be like. It was ugly, it might have been cruel, but it was true to life.

Am I a minority of one who finds Leigh grating in her faded Southern belle histrionics? Her characterization elicits the opposite response in me that the playwright Tennessee Williams wished to elicit. He wanted to show a beautiful and sensitive creature (Blanche) destroyed by the brutality of the world (Stanley). He wants my compassion for Blanche, instead I feel annoyance at her gimmicks.

She is much more effective in her quiet moments when she confesses how much she wants Mitch (Karl Malden), her suitor and Stanley's friend, to marry her or her serpentine approach towards the young boy who comes to the door soliciting. You see the traces of what finally drove Blanche out of her home town and into near destitution and subsequently madness.

Forget this Brando bio, pick up a copy of the movie (and some others that I will note in future blogs). If you live in the east end of Toronto, you probably know about a fantastic little video store called Revue Video at 207 Danforth Avenue (at Broadview). This is where I sourced most of the films I mention in this blog. You won't be disappointed.
Posted by A Lit Chick at 8:40 PM

Hey I love the blog!See you when you get home!