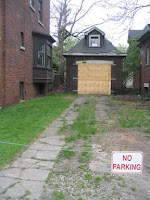 The house definitely has a Miss Havisham feeling ... The heartbroken Miss Havisham in Dickens' Great Expectations had all the clocks stopped at the exact point at which she had learned of her betrayal by her fiancee. She remained in her decaying mansion and never removed her wedding dress.

I think of her when I pass this lovely but decrepit house each day on my way to and from work. It is at the end of a long side street in Riverdale and sits on the corner of Broadview Ave. facing Riverdale Park. A small coach house, only recently completely boarded up, sits like an orphaned child to the east of the house.

The presence of the coach house suggests to me that house is at least 100 years old, probably from the 1880s. When I was doing some research on our own house, a narrow brick Victorian which was built in 1889, a friendly source at the City of Toronto archives told me that the street we live on originally had a German name but it was changed to the last name of a prominent architect who had built some of the houses on the street after WWI due to anti-German sentiment.

No one lives at this house now, this house that piques my interest so. The windows are broken and dirty, the tattered floral curtains which peek out in the main room are reminiscent of long ago wartime stringency. They are the only "homey" touch I can see from the street. The lights are never on even in the dying winter light. Seasons pass and still the enormous wrap around porch that faces Broadview Ave. has broken, rotting wooden stairs and slabs of chipboard guard the battered door and the three bay windows in the front. The red brick of the house is blackened and dull.

Still, "she" has great bones as they say in the real estate business (as if she was a fading beauty who retains her terrific cheek bones and lovely eyes). Yes, I think of her as feminine, a large sprawling, ruined matron who is now almost forgotten. The peeling cream coloured paint that once covered her is like a decaying wedding dress. The exterior ornamentation and architectural detail dirty, laden with soot, like someone who has forgotten to remove her rouge long ago.

What did she do to be so forsaken? She sits like Miss Havisham awaiting her lover's return only to be disappointed for an eternity.

I've said that it is uninhabited and yet periodically someone (who could it be? the child(ren) of an elderly but ill parent who can no longer care for the house?) puts up another boarded window, closes up the coach house, installs a "no parking" sign in the long drive that leads to the coach house, throws out the odd bit of rubbish which, with some embarrassment, I peek at curiously. They, those that add these things to the house, haunt it unseen by neighbors. They seem to make the house more and more forbidding to those that pass it.

I imagine some children surreptitiously commandeering the coach house for a fort or a playhouse now only to be thwarted. Raccoons may nest there - as this was the fate of another abandoned house a few doors east - birds may fly into the broken windows and find temporary homes.

But I pass it each day and wish the old lady well. 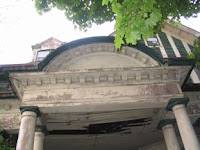