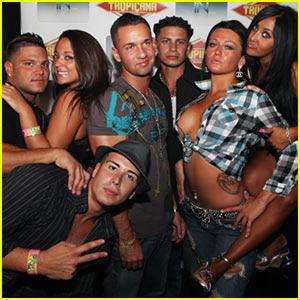 Being of Sicilian descent I love an argument so I would like to respond to my impassioned friend Shorty's response to my post on Jersey Shore (see below for Shorty's comments).

I don't have a problem with negative representations of Italians in the media. You could argue that a great deal of the art produced by Italians and Italo-Americans may present Italians in a negative light.

In my own writing I have often tackled difficult and unpleasant scenarios within the Italo-Canadian community: domestic abuse, the damage done by patriarchal culture, denigration of women, violence, an infatuation with the mafia subculture (I admit it - I am enamored of the gangster subculture too). So I am not for antiseptic, squeaky clean representations of our people. I am for nuance, complicated personalities and sensitivity in creative work.

It's just a reality show and some would argue it shouldn't be taken that seriously. But what does Jersey Shore bring to the table? The opportunity to laugh at some uneducated, vain kids who think this is their ticket to fame and fortune? What value is there is watching Snooki get punched in the face by a man twice her size?

As I said I don't blame them - I'm sure this is more fun than going to college or working in the family business.

What makes the biggest media splash - episodes of Jersey Shore on MTV or the publication of The Origin of Species, a recent award winning book by the Canadian writer Nino Ricci, in which the main character, Alex Fratarcangeli, is a coward and a heel and is vaguely ashamed of his roots?

The show and its content matters because it has so much exposure. It has exposure because it is sensational and draws attention to bad behavior that is rewarded with media attention.

I am not the "media". I'm just a thinking person with a point of view who is free to express it - as is Shorty. Ain't America beautiful?
Posted by A Lit Chick at 9:51 AM