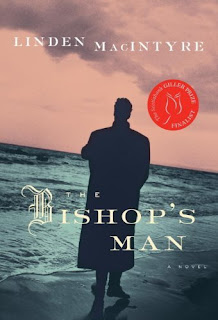 I dreaded this book. I was not enthusiastic when it was selected as our next book club choice. Pedophilic priests and the church's efforts to conceal these crimes? That tired, upsetting story? But that is the beauty of the book club, it compels you to read books that you might otherwise not read.

Who is the Bishop's man? I say, semi tongue in cheek, think Michael Clayton in the film by the same name: a fixer. Someone who is sent in by a big powerful organization to deal with all the human detritus that somehow manages to imperil the reputation and the livelihood of said organization. Now you have sense of what the priest Duncan MacAskill has been asked to do within the Catholic church.

The portrait of the priest Duncan McAskill, the main character, is nuanced and subtle; MacIntyre easily assumes the voice and temperament of this man - a good man who has been lead astray by his desire to do the best he can to serve the Church and yet he has become an unwilling accomplice in covering up many of its most heinous crimes. His past with the church is a web of manipulation and deceit despite his best efforts.

It was not always so ... we get a clear sense of a young, idealistic boy from out East who wanted to serve God. In 1968, when he witnesses some untoward behavior by an elderly and well respected priest, a sort of mentor named Roddie MacVicar, and tries to report it to the Bishop he is summarily shipped off to Tegucigalpa in Honduras and keeps mum about what he saw, seeming to doubt his own eyes.

There are hints throughout the novel, in the form of diary entries, that things did not go well in Honduras. Alfonso, a fellow priest, dies under circumstances that are not immediately evident. Jacinta, a colleague and possible love interest for Duncan, disturbingly occupies a great deal of his writing and thoughts. Alfonso's purity seems to serve as a sort of foil to Duncan's self-perceived moral weakness.

Proving himself to be reliable to the Bishop when he returns to Canada, he becomes a sort of hit man for the church speaking to errant priests and questioning parishioners, smoothing the waters, talking families out of criminal charges against priests and the church. A philandering priest sent to Toronto, a pedophile sent to Boston. He is the fixer, the bearer of bad news for the misbehaving priest and the soother of the angry, frustrated families implicated.

In the 1990s, he is taken out of the comfortable university environment that he he now lives in and gets sent to the small parish of Creignish in Cape Breton, very close to where he once grew up. The portrayal of its inhabitants is sharp-eyed and clear, unsentimental but sympathetic.

Duncan is lonely, drinks too much, is underemployed and emotionally disengaged. He struggles with his faith and the dictates of the church that he tries to observe. He is not so far removed from the feelings of other men that he is not turned by a pretty face or ankle.

His parishioners are unhappy in various ways: demoralized by the lack of work, the industry which once brought work wreaks havoc on the pretty land they worked on. Now that the fishing industry is dying they have neither: no work and a wasting of the once unspoiled beauty of the land and waters. American tourists, referred to as "foreigners", seem to provide the main source of income but it is not received without some sense of bitterness.

In Creignish he encounters a trail of broken lives created by the silent complicity of the church hierarchy and slowly learns what was the cause of such misery. The priest observes:
"I see it now, and the amber light of the falling September sun turning fields to gold and setting first in the windows of the silent houses where all the secrets are."

There were so many hints along the way that the community was not at peace with the church: the angry glare of a young girl forced to give up her child that she conceived with a priest who was shipped out of the parish; the ever present Brendan Bell, ex-priest with a dubious past floating in and out of the story line; young Danny McKay's disturbing and tragic acting out and its ultimate conclusion; a young man who wishes to be a priest accused of being homosexual; Danny's aunt Stella McKay's mysterious hints about Danny's behavior; the aggressiveness of the priests in dealing with Danny's mischief and self-destruction ...

It is to MacIntyre's credit that we feel both a repulsion for MacAskill's role and a deep sympathy for the man. Because he is fundamentally decent there is the inevitable crisis of conscience and emotional turmoil which, oddly for me, I left me cold, unbelieving in the narrative voice.

It is now widely known that Church covered its tracks in the case of unmasking pedophiles and abusers. I believe in the chaos and destruction that ensued but I don't believe that this priest, in particular, did not understand the extent of what he had tried to cover up. It seems too little, too late.

There is a ham-fisted metaphor about MacAskill seeing an eagle tear a heron to shreds ... is that the priest MacAskill being destroyed by the church? The priests and their alleged pedophile victims? Young Danny McKay done in by unknown exploiter? Or all of them?

The answer may surprise you.
Posted by A Lit Chick at 7:55 AM

Oh, I won't read your entire post just yet. I am going to read this book. It on my list. I read your post up to the tired story line of priest abusing boys :)

Don't be discouraged ... I was resistant but MacIntyre won me over. :)