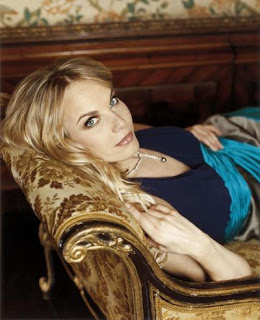 Live broadcast of La Cenerentola at the Metropolitan Opera, May 9, 2009

This is my first comic opera and the first ever for B, a good friend. I didn't want to scare her off. I remember I took R to a four hour production of Donizetti's Anna Bolena (without surtitles!) in Italian at the then O'Keefe Centre when we started dating. Ai yi yi ... and yes reader, he still married me.

As a neophyte, comic operas are not among my favourites, nor is Rossini particularly. I favour something darker, more realistic - more in the vein of the late 19th c. - Verdi, Bizet or Puccini (say La Traviata, Tosca, Carmen, Madama Butterfly or La Boheme). No gods and goddesses cavorting for me or enchanted princesses. Blood, murder and adultery - that's more my thing. You know, starving seamstresses and their lovers, kind hearted courtesans, fifteen year old geishas and evil cigar factory girls. That's more my speed.

Everyone is familiar with the fairy tale of Cinderella (La Cenerentola). I won't rehash the plot nor try and critique the performances which I am not knowledgeable enough in opera to do. Let me offer a novice's view ... watching opera live in a cinema on a huge screen is new to me.

This is only my third production in a cinema - last year we saw La Boheme with the Romanian soprano Angela Gheorghiu and this year we saw Madama Butterfly with Patricia Racette. We have conservative tastes in this art and these two, while immensely popular, are seen as traditional chestnuts for seasoned opera goers. For us it is still new and exciting and we learn something everytime we see a production.

My concerns have to do with seeing the medium of opera (where the sound and the voice reign supreme) in a movie theatre where the visual supersedes everything else on a fifty foot screen. It is an uneasy marriage at times.

I was not familiar with the Latvian soprano Elina Garanča who starred as Angelina (la Cenerentola) in this production. But she is picture perfect here with a soaring beautiful voice and charming manners. What a workout these roles are - during intermissions you can see the sopranos panting, trying to catch their breath as they come off stage which is an intriguing backstage view. She has the sweetness and freshness for the role which disarms the listener (and viewer). She is lovely (look at those Slavic cheekbones and blue eyes above) - few could look so dazzling on a fifty foot screen. Her costumes (drab servant girl, glittering blue ball gown and a traditional wedding dress at the end) and jewellery dazzle ... as do the stepsisters' attire which is exquisitely designed in strong contrasting colours.

The sisters are all in deep purples and dark blues, reds and rich plums with striking dashes of makeup and lipstick. Cinderella is light and fresh and cool looking (plain sometimes I think but that's just my taste) to emphasize her simplicity and innocence. As ever, heavy makeup equals villainy here. I was never one who dreamed of being Cinderella. It's difficult to play this role without coming off as cloying and sickeningly sweet - I think Garanča succeeds in disarming the audience.

Elina is paired with the tenor Lawrence Brownlee who has an attractive face and demeanour but, for me, I found it difficult to imagine him as Cinderella's dashing prince Don Ramiro because he is rather on the short side and portly and she towered over him a bit. He is, by turns, appropriately tender, righteous, kind, chivalrous, furious, but alas, not striking enough for our Cinderella.

There is a new twist for those who know the fairy tale because here in the Rossini opera (written in 1817) - the evil stepmother is replaced by a cruel stepfather, Don Magnifico. Instead of a Fairy Godmother we have Alidoro, who seems to be a sorcerer of sorts and the Prince's confidant. Cinderella is identified by the Prince by her bracelet not by her glass slipper. I do think that this small change loses some of its power in this interpretation - the image of the glass slipper left behind is so powerful as well as the Disneyesque fighting of the sisters over the shoe when the Prince seeks Cinderella plucks at something undefinable in the feminine psyche (for better or worse).

There is also a greater focus on the male characters (Alessandro Corbelli as a cruel and very comically played Don Magnifico), Dandini (Simone Alberghini) who impersonates the Prince to deceive the two avaricious step-sisters (played with great mischief and zeal by Rachelle Durkin as Clorinda and Patricia Risley as Tisbe), and Alidoro (John Relyea) rather than a fairy godmother who grants Cinderella her wish to attend the Prince's ball.

The set design by Maurizio Balo has a weird Alice in Wonderland feel with an enormous, very simply designed sets in stark colours and doors which are twenty feet high but, sadly and oddly, this just emphasizes Brownlee's lack of physical stature. Nor does the final scene where Brownlee is literally placed on an over sized white wedding cake like a small doll help.

And in an amusing twist (for me) the Met conductor Maurizio Benini looks very much like my Italian teacher TV (those are his initials by the way - not that he is on TV!). Outside an ice storm raged and we could hear the storm during the production but when we left all was sunshine and warmth ... as it should be.
Posted by A Lit Chick at 7:30 PM