The Masses, the Mansions and the Masseys 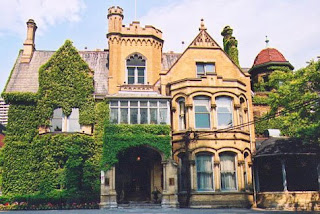 Improbably, my socialist pink heart always smarts a bit as I pass the old Massey mansion on 515 Jarvis St. here in Toronto. At one time, it was right on my way from our house in the east end to the university when I went to work by car. That was when R was working horrendously long hours and I was on J pick-up from her daycare a number of years ago.
I liked winding past the old Victorian houses in Cabbagetown before I reached Jarvis St. Once told I had a Victorian soul, I was enormously pleased. My friend either meant that I loved things of the 19th c. or was hopelessly old-fashioned and romantic (I'm unsure which - possibly both).
519 was inhabited by the formidable Massey clan and it now serves as a large venue for a popular restaurant chain. It is very well maintained I must say - the only eyesore being the gas station immediately to its right on Jarvis which always enrages me a little when I drive by it. A conservatory once stood there. In the late 19th c. someone once quipped that there were only two classes in Toronto at the time: the masses and the Masseys. How true that must have seemed in light of their wealth.
It's not particularly beautiful or grand but I find the sight very affecting. The mansion itself seems a hodge podge of architectural styles to my unsophisticated eyes. But there is something about the dissolution of a once "great" family and the general decline of the area (which has picked up commercially over the last number of years admittedly). When I arrived in Toronto in the 70s jokes about the unsavory "commerce" on Jarvis abounded.
The Massey house was originally built in 1867. At the time, Jarvis Street was one of the wealthiest parts of Toronto and the street featured many such large mansions along a wide tree lined boulevard which housed the captains of industry. The street was nicknamed the "Champs Elysées" of Toronto. Old photographs will attest to its beauty. In 1880, it was purchased by Hart Massey, the industrialist, who built the firm which eventually became Massey-Harris. The house was named Euclid Hall (for a previous home owned by the Masseys in the U.S.) and the family added greenhouses outside. Hart's son Chester Massey built the home to the north at 519 Jarvis where Vincent Massey, the first Canadian born Governor General, and his brother the actor Raymond Massey were raised.
As various commercial operations moved into the area, the Masseys left as well as many other affluent Torontonians who moved to the Rosedale area. By the turn of the century the area had begun to lose its sheen. The building was bequeathed by Hart's daughter Lillian Massey, a great philanthropist and eccentric in her own right, to the University of Toronto’s Victoria College when she died in 1915.
It then became the first home of the Toronto radio station CFRB in the 1920s and converted to an art gallery until 1960. It became a restaurant called Julie's Mansion. The grounds were sold off, the greenhouses demolished and replaced with a service station which still stands there today. How demoralizing that must have been.
In 1976 it was renamed the "Keg Mansion". And oh how the mighty have fallen ... But it is not alone ... consider the fate of some of the surrounding mansions.
This is an excerpt from a new manuscript entitled "Vita's Prospects" that I am working on (unfinished) with thanks to the journalist Nicki Thomas for a recent article in the Globe and Mail entitled "Two mansions mark the tipping point of Jarvis", May 2, 2009:
Vita could now pick out those mansions along Jarvis Street once inhabited by the very wealthy: the two Massey mansions, owned respectively by industrialist Hart Massey at 515 and son Chester Massey at 519, sitting cheek by jowl; builder Charles Rundle at 514; builder Edward Gallow's house at 512; George Gooderham, President of the Gooderham and Worts Distillery, at 504; businessman William Cawthra’s home on the southwest corner of Jarvis and Isabella. Now they meant little more than street or perhaps at most a building name to most people here in Toronto.
The houses at 512 and 514 were now bed and breakfast hotels and Vita is secretly grateful for the extreme care and attention the owner has lavished on these grand old ladies over the last twelve years that he has owned them. But there is still an element of sadness in beholding them despite their careful upkeep. She read recently that the owner is broke and can’t afford to keep them. However, he did save the pair of manses from more ignominious fates.
The Rundle house was derelict by the 70s – unheated and utterly deserted. The city took it over in the 1980s. Then it was purchased by Virgin Records and they used it as a sort of haven for musicians who could lodge there and use it as rehearsal space. Perhaps 512, the Gallows house, fared a little better, and was treated a tad more respectfully. For twenty years it was inhabited by sixteen Jesuit priests. Perhaps it was better kept, even if they did not have strict appreciation for its Victorian charms.
Somehow, don’t ask Vita to explain, the fact that the Gooderham house at 504 is now a well-known Italian eatery and Euclid Hall, the former mansion of the formidable Hart Massey, is now a chain restaurant adds insult to injury. But the worst, she fears, is the fate of Elderslie at 471 which once served as the residence of the Hon. Alexander Morris who was in Sir John A. MacDonald’s cabinet and now serves very competently as a Mac’s Milk.
Posted by A Lit Chick at 11:50 AM