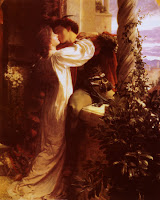 Hmm, spring is here! Time to expose the offspring to Stratford ... I thought Romeo and Juliet might be a good idea as it is a well known plot. We read a kids' version of the play together before we went to Stratford.
Once upon a time I asked my significant other why he didn't seem to enjoy the Stratford Festival (note, he says he no longer feels this way). He said it reminded him of ... and I'm quoting: "death" because the average age of the theater goer seemed to be in the 70s. This is a gross exaggeration; however, I know what he's talking about. But the demographic does seem to be changing a bit. The more serious fare attracts an older audience. Unless we wanted see Cynthia Dale (which we did NOT) the audience did tend to be older in the productions we selected.

Every year I would talk him into going to see a play close to my birthday in June. Hey, I'm an open minded gal, I even let him pick the production. Now we choose with the offspring in mind: can she understand/withstand this production? Can we find a children's version she can read before we go? Two years ago we saw Twelfth Night which she seemed to enjoy. Fortuitously there is an Amanda Bynes movie which follows this plot called "She's the Man" which we all loved, adults included. Last year it was Comedy of Errors. She seems to fare best with the comedies.

So it was Romeo and Juliet this year. The director Des McAnuff made interesting choices in the staging and costuming. For instance, in the opening scene where we see the warring Montagues and Capulets, the actors are dressed as if they are on the set of La Dolce Vita circa 1960 complete with shades, slick suits, windbreakers and a vespa on stage. When the Capulet clan prepares for the masque they slowly change into traditional, and very beautiful I might add, clothing which they retain until the final scene (Paul Tazewell was the Costume Designer).

In the final scene when we see the devastation wrought by the warring families in Juliet's tomb, the clothing is vaguely, just vaguely, 40s noir. Someone suggested that this was meant to signify the universality of this prejudice and hate (it can be found everywhere at all times) but I found the effect disorienting.

The designer had dressed the Montagues in various shades of blue, the Capulets in reds and pinks, all beautifully done, exquisitely done.

I loved the idea of colour blind casting which fits in perfectly with the theme of the star crossed lovers. This production featured a black Juliet (Nikki M. James), making her Stratford debut, and a white Romeo (Gareth Potter) and both had, interestingly, both a black and a white parent.

Juliet seemed more overwrought than overcome with passion. Although Juliet is only meant to be 14 in the play (impossible to cast I know), even this young actress seemed too old to play the ingenue. Gareth Potter was charismatic and vibrant as Romeo even if he did not have the classic good looks for the part. But there lacked a certain indefinable chemistry between the lovers.

Ever the superficial theater goer I said to J, our daughter, that we should try and find a better looking Romeo in the cast and to my surprise saw the name of ex-co-worker Azeem Nathoo in a largely non-speaking role. What a nice surprise!

Evan Buliung as Mercutio is particularly appealing. There is something about his physicality and spirit which seems reminiscent perhaps of the original bawdiness of many Shakespearean characters.

Peter Donaldson as Friar Laurence, Gordon S. Miller as Benvolio were self-assured, confident in their command of the parts as was Lucy Peacock, Nurse to Juliet. John Vickery as Lord Capulet grated on the husband but I preferred him to Sophia Walker as Lady Capulet whom we have seen in previous Stratford productions and seems to shriek all of her lines as a way of showing emotion.

The Set Designer Heidi Ettinger cleverly utilizes a medieval bridge to double (triple) as Juliet's balcony, the Capulet tomb where Juliet is buried, and a bridge where the feuding families run to and fro tormenting each other with abuse and blows.

A very cool May day on which to visit Stratford; the lovely swans were out in full force. We admired from afar remembering a nasty episode where one tried to bite me because (I think) he or she thought I was trying to to take its food when I was trying to feed the greedy so and so.

We had dinner at Down the Street, a small restaurant which we love for its food and cordiality.
All seemed pleased, the reluctant spouse, the slightly bored tweenie who did her best to keep up with the play and mama who forced them all to come out and play.
P.S. It looks like someone agrees with me in part about this production, see Richard Ouzounian's critique of the production at Foiled by Star-crossed lovers.
Posted by A Lit Chick at 9:38 AM