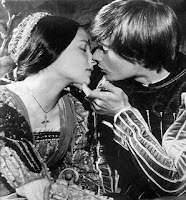 Who would dare critique the master? Not I. With a Stratford production of Romeo and Juliet looming I wanted to reread the play. Instead I will concentrate on the origins of the play, which are, not surprisingly, mostly Italian in origin. This information is all derived from the Arden edition of the play and edited by Brian Gibbons.

A fragment of the plot can be found in the Greek play Ephesiaca by Xenophon (I have read that he lived in the 2nd, 3rd or 5th c. A.D.). It tells the story of Anthia, who is separated from her husband Habrocomes and is rescued from robbers by her admirer Perilaus. To avoid marrying her rescuer, Anthia obtains a potion which she hopes will kill her; it is actually a sleeping potion. She is buried in a tomb, awakens and is carried off by tomb-robbers to enjoy "other adventures".

But it is not until the late 15th c. when Masuccio Salernitano included a story with elements of the themes found in Romeo and Juliet that we would recognize today in the 33rd of his Cinquante Novelle (1476). The story is set in Siena. Mariotto secretly marries Giannozza with the assistance of a compliant Friar. Mariotto kills a citizen and then is exiled to Alexandria. Giannozza is pressured to marry but instead she decides to take a sleeping potion and sends a message to Mariotto. She is buried and rescued from the tomb by the Friar. She sets sail for Alexandria in search of Mariotto but her message is never delivered. Mariotto returns to Siena disguised. Thinking her dead, he enters her tomb, is caught and beheaded for his desecration. Giannozza returns to Siena, learns of his death and dies of grief in a convent, like any nice Italian girl would do.

In his writings, Masuccio stressed that the story was based on real events which happened during the course of his life.

Luigi da Porto (1485-1529) revisited the plot in Historia Novellamente Ritrovata di Due Nobili Amanti (A Story Newly Found of Two Noble Lovers) published in 1530. He set the story in Verona and renamed the lovers Romeo Montecchi and Giulietta Capelletti perhaps utilizing the surnames of two very real warring families in the 13th c. although the Montecchi family lived in Verona and the Capelletti family was from Cremona and there was no romance between characters of these names. Dante mentions the surnames of the two families in his Purgatori VI as an example of civil unrest.

Matteo Bandello (c. 1480 – 1562), an Italian novelist, published his version of the da Porto story in 1554 which was translated into French by Pierre Boaistuau, a French author, editor, translator, in 1559.

The English poet Arthur Brooke translated this into a 3,020 line poem (1562) as The Tragicall Historye of Romeus and Juliet which is likely the version that Shakespeare read.

Some thoughts on the performance to follow ... all drama leads to Italia!
Posted by A Lit Chick at 3:00 PM