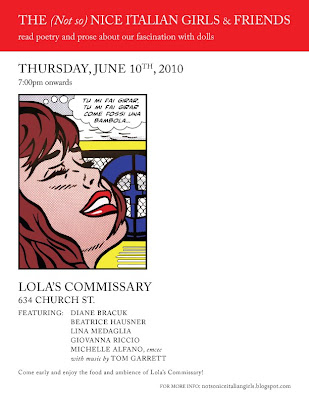 Diane Bracuk is a freelance writer specializing in health and women's issues. Her fiction and poems have appeared in Canadian journals such as The Antigonish Review, TickleAce and Other Voices. In Great Britain, Diane’s work has been published in Image, Ireland's largest circulation woman's magazine, and You Magazine, part of the Saturday Supplement of England's Daily Mail.

Beatriz Hausner’s poetry is rooted in the legacy of international surrealism, especially its Spanish American expression. Hausner has worked tirelessly to promote international literature in Canada, through her own translations, as well as her advocacy work (she was President of the Literary Translators' Association of Canada and is one the founders of the Banff International Literary Translation Centre). She is one of the publishers of Quattro Books. Her work has been published in Spanish, French and Portuguese translation. The Wardrobe Mistress was published in 2003. Sew Him Up is her latest poetry collection (2010). By day, Beatriz works as a librarian at the Toronto Public Library.

Lina Medaglia is a teacher, a peace activist, and a crisis counselor for abused women and children. Her writings have included a libretto for a three-hour feminist musical called Casanova, the lyrics for a progressive country album, and two albums of political rock. At the age of eleven, Lina immigrated with her family to Toronto, from a tiny mountain village in Calabria. Her first book, Demons of Aquilonia, is a fictional autobiography based on her family's struggles with 'passing,’ or reinventing identities for the purpose of survival and overcoming. Lina lives and works in Toronto with her family.

Giovanna Riccio was born in Calabria, Italy and grew up in Toronto where she studied philosophy at the University of Toronto. Her poems have appeared in journals, magazines and newspapers, including the Eyetalian, Poetry Canada Review, CV2, Tickleace, and Italian-Canadiana. Giovanna completed her first manuscript, Strong Bread, earlier this year and is in the process of getting it published. Her dramatic monologue, Vittorio, will be published by LyricalMyrical Press in the spring. She has recently retired from teaching and is working on a new book of poetry.

As emcee …
Michelle Alfano is a Toronto writer and a Co-Editor with Descant. Her short story “Opera”, on which her novella Made Up Of Arias (Blaurock Press, 2008) is based, was a finalist for a Journey Prize anthology. Her fiction and non-fiction work has been widely published in Canada in major literary publications, and has also appeared in the U.S. She will be featured in a forthcoming documentary on the Saturnia, an immigrant ship which transported thousands of Italian-born immigrants to Canada in the 1950s and 60s and which will be featured on OMNI-TV. She is currently at work on a new novel entitled Vita's Prospects.

And music by ...
Tom Garrett has been performing at open stages in and around Toronto since moving to the city in 2003. His acoustic styling is reminiscent of James Taylor mixed with a touch of Springteen.
Posted by A Lit Chick at 8:23 AM