You love the cat more than me! And Other Tales of Motherhood 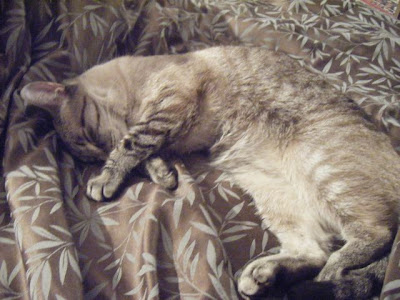 One day I will write a book about motherhood and I will call it (yes, that's right): You love the cat more than me! And Other Tales of Motherhood. More than three years ago when we got Sugar, who is part Siamese, part Tabby, I would enrage my daughter J if I showed him the slightest gesture of affection (even a scintilla!) after I had just reprimanded her about something.

I can't help it, at least Sugar never yells back. The poor little guy has the tiniest meow I ever heard, just a scratchy little voice that he rarely uses (his nickname is also Scratchy).
When we went to our local vet to choose a cat they had three breeds of kittens for sale. Sugar was the runt of the litter and had been separated from his sibs because, as the smallest, he was not getting enough milk from his mother and was smaller than the rest. He had blue eyes and white fur which is now striped with coffee brown and black stripes (that's how we learned of Sugar's probable paternity - we assumed from his colouring as a six week old kitten that he was a pure blooded Siamese, somebody made a bundle on that error).
When the cage door opened he leapt into my arms and I never looked back. There were two other cats (less expensive and, perhaps not so oddly, much less cute). I joke that R wanted to get the other calico cat because it was cheaper but it would never have been as loving as Sugar. He usually agrees with me.
Sugar is an eccentric little fellow. He walks around with a stuffed mouse as a companion whom we call "Mrs. Mouse" and I playfully refer to as Sugar's wife as in "Oh no, Mrs. Mouse is under the dining room table, I think Sugar was having his way with her ..." Teenage daughter's response: "Ewww, mommy!" Mysteriously, we have never seen him carry Mrs. Mouse. But we do find Mrs. Mouse in the oddest places. Unless ... Mrs. Mouse assumes magical powers while we sleep and transports herself around the house.
One day I asked R to take a photo of Sugar with Mrs. Mouse in his little blue bed. He refused. He said that I was this close to slapping some clothes on Sugar and he wasn't going to participate in that ... He seemed to feel that my request was definitely in cat lady territory and he wasn't having any part of that. I see his point.

When Sugar wakes up he straggles into the kitchen for breakfast like a lazy teen ... half an hour after everyone else.
After breakfast Sugar follows me upstairs and sits on the bed near the bedroom window which faces the street as I get ready. As I put on my mascara and lipstick, he stares out the window. We call it his TV and J says he is "watching his stories" which inevitably involve plots with squirrels, birds, passing cars, snowflakes and changing weather patterns.

At dinner time, he sits by my chair patiently and stares into my eyes ... willing me to give him a little slice of meat or fish. Go over to R's side and stare at him, I say. R never buckles. I always do if the food is appropriate. And Sugar never moves until dinner is over.

At night, he crawls in beside and R and me and tries to squeeze in between us. If there is no space he sits on my back or tummy with the patience of Job until I move ... he gets as close as he can get to R and then lies down and begins to suck on his paw. I always imagine that he was separated from his mother too early and that this comforts him. But I am a sucker for babies (baby anything is cute to me) and this is probably a total fiction.


This brings me to the last thing about Sugar and why R really discouraged me from writing about him. He is completely infatuated with R and all things silver (R has silver hair). He is also an unrepentant thief (Sugar that is). When he steals stuffies from J's bed, he always steals something that looks a bit like him: grey or white in colour and small. A paternal impulse? You tell me ...
Seven things Sugar likes:
Posted by A Lit Chick at 7:58 AM

Quirky as they are, a cat makes a very good friend.

Greetings from Cape Town.
Me too - I love cats. I gave a black one called Fabio.
Cool blog.
Juz
:)

Ah yes! Thanks for posting!