"There is a certain charm in being near a dangerous being ..." 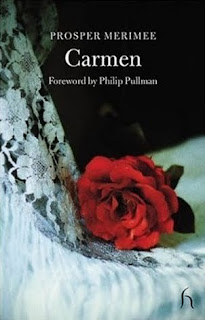 Carmen by Prosper Mérimée (Published in 1845 as a serial in La Revue des Deux Mondes) 48 pages
I sent a youtube link of Angela Georghiu singing La Habanera from Georges Bizet's opera Carmen to a friend when I learned that she had been accepted to grad school (shout out to Nyla - brava!). And that reminded me of the novella by Prosper Mérimée on which it was based and which I have not read for many years.
Ostensibly about gypsy life in Spain in the early 19th c., Carmen was first published serially in La Revue des Deux Mondes in 1845 and then two years later as a book. Mérimée was inspired by Antoine Francois Prevost's Manon Lescaut (1731). You may read the whole text here. It's very quick read at 48 pages.

The unnamed narrator meets Don Jose Navarro, a fallen nobleman turned dragoon turned bandit who is traveling in disguise. The narrator quickly guesses that Jose is a bandit and though warned by a servant that he should flee claims, "There is a certain charm in being near a dangerous being ..." The bandit saves him from possible death after the narrator also encounters Carmen, a bewitching gypsy, who steals his watch and urges Jose to slit the man's throat.

Carmen claims that she is Jose's romi ("wife" in gypsy culture) or is she? Carmen is as fickle and as wilful as all the stereotypes down through the ages have suggested.

Here is, literally, the mother of all Carmens, the original, much imitated, desired and reviled:
Her skin, though perfectly smooth, was almost of a copper hue. Her eyes were set obliquely in her head, but they were magnificent and large. Her lips, a little full, but beautifully shaped, revealed a set of teeth as white as newly skinned almonds. Her hair - a trifle coarse, perhaps - was black, with blue lights on it like a raven's wing, long and glossy. Not to weary my readers with too prolix a description, I will merely add, that to every blemish she united some advantage, which was perhaps all the more evident by contrast. There was something strange and wild about her beauty. Her face astonished you, at first sight, but nobody could forget it. Her eyes, especially, had an expression of mingled sensuality and fierceness which I had never seen in any other human glance. "Gipsy's eye, wolf's eye!" is a Spanish saying which denotes close observation. If my readers have no time to go to the "Jardin des Plantes" to study the wolf's expression, they will do well to watch the ordinary cat when it is lying in wait for a sparrow.
Carmen is compared to a raven, to a wolf; her hair is too coarse. Her beauty is strange and wild - perhaps she is not even human it implies; she is something feral, closer to an animal than a human.
Months later, the narrator and Jose meet again under very different circumstances. Jose has been arrested for murder and sentenced to death. He tells his story to the avid listener who records his tale before his inevitable execution.

Jose had joined the Spanish cavalry as a corporal to escape punishment because he had assaulted another nobleman. One day, as a dragoon, he was called upon to quell a disturbance in the cigar factory. The factory workers were composed entirely of women who, due to the extreme heat, all worked in their chemises. Imagine the setting. Imagine the writer imagining the setting and you will see the power of this story.
Jose was the unfortunate dragoon who had come to arrest Carmen for assaulting a fellow worker. She had made a "checkerboard" of the poor woman's face during a fight on the factory floor.
Carmen captivates him, speaking to him in his native tongue, Basque, and she persuades him to let her go. She toys with him saying that she is now his romi and brings him "home" for a night of lovemaking and then cruelly discards him in the morning. Jose eventually deserts the army to be with her.

"We were not made to grow cabbages," Carmen says to him tauntingly and urges him to become a bandit in the Andalusian mountains with her gang but to his horror the band that he has joined is lead by Carmen's husband Garcia de Borgone, a one eyed brute, who would just as soon sell the girl as marry her. Garcia's days are numbered as Jose cannot live with the knowledge that he shares Carmen with him.
Even with Garcia out of the way, Jose cannot eliminate all of his rivals, namely a young picador named Lucas. Carmen refuses to give up Lucas and foresees her demise at the hands of Jose (something that she had foretold from the start of their relationship with her fortune telling). Jose hands himself in to the authorities after he disposes of Carmen in a rage. He is a broken man who faces certain execution for his crimes.

Search in vain for any semblance of balance in the depiction of Carmen and the gypsies; hence, her enduring power as a symbol in literature, visual art, dance, opera.
We have an obsessive interest in gypsies in the West, more commonly known now as the Roma. Mérimée incorporates every stereotype about gypsies: conniving, murderous, amoral, acquisitive but powerfully attractive as well - possessing unusual beauty, strength, charm, regal bearing, wit. Carmen is portrayed as an almost supernatural being who outwits all who come in contact with her. Even her death appears to be of her own volition; she has determined how and why she will die.

This is much the same as the centuries old image of the bastard child borne of true passionate love: doomed, unwanted, illegitimate beings but invested with intense beauty and charm because the lovers had expressed true passion for each other. Perhaps we invest the thing we fear the most with almost unearthly attributes and extreme characteristics. See here for a quick cataloguing of the Romi in literature.

The composer Georges Bizet (1838 - 75) based the opera Carmen on this novella. It was not well received initially and its failure was said to have possibly hastened his death but he left us with many beautiful arias and choruses: La Habanera, Seguidilla, The Flower Song and the Urchins Song.

And Carmen lives on ... as a testament to the desire and fear that powerful female sexuality elicits.
Posted by A Lit Chick at 8:28 AM

It is extremely interesting for me to read the article. Thanks for it. I like such themes and anything that is connected to them. I definitely want to read a bit more on that blog soon.

Well thanks Anonymous - I appreciate your responses. :)