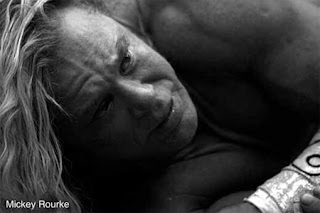 This is a disturbing film and not just for its subject matter but because we get to see up close what Mickey Rourke has done to himself over the years. I don't know if it is his ill-fated and short-lived boxing career, plastic surgery, the steroids he was rumored to have taken for the film, or botox (or a combination of all) but it has wreaked havoc on the man's face.

I still remember his charming, quirky beauty in Diner (1982). Sadly, that seems a world away now.

Rourke and the movie are getting wonderful reviews, deservedly so. His turn as the beaten up, used up professional wrestler "Randy the Ram" struggling with his dysfunctional, half broken relationships including prospective girlfriend the stripper Cassidy (Marisa Tomei) or Stephanie, his unhappy, neglected daughter (Evan Rachel Wood), is heartbreakingly rendered.

He is utterly convincing in the ring "fighting" his opponents, stepping into a tanning bed to keep his wrestlers' tan, getting his hair bleached for a gig, showing up at poorly attended appearances with other washed up wrestlers, kibbitzing with the other men (who appear to be real wrestlers). All of the scenes seem painfully real.

I was wondering if other filmgoers were having a difficult time separating the fate of Randy from the fate of Rourke? I was immensely uncomfortable watching Rourke as Randy suffering a multitude of sorrows: returning to his depressing, low rent trailer and being locked out because he is behind in his rent, begging for extra work from a snide little pit bull of a grocery manager, working despondently at a deli counter and flirting listlessly with the unimpressed middle aged customers, being turned away at the door by his daughter Stephanie, showing up at a wrestling appearance to sign only a handful of autographs, leaving bouts bleeding (some of which he himself inflicted to please the crowd), cut up, very ill, suffering a heart attack.

Who could watch these scenes and not think of Rourke as the semi-washed up actor? The smart mouth who claimed that acting was for "sissies" and then turned to boxing only to be pummeled into an early retirement as he was too old to continue in the sport? The man who was so isolated from the rest of humanity and demoralized that at an awards ceremony he once thanked his dogs for standing by him through hard times?

I'm rooting for him and hope he (and the film) will do well at the Oscars.
Posted by A Lit Chick at 9:18 AM