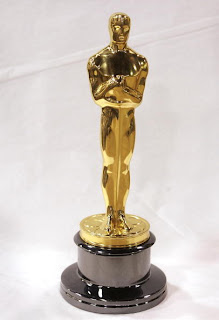 Nothing turns me off more than two eminent film critics like David Denby and A.O. Scott turning up their noses at this year's Oscar crop on a recent Charlie Rose show. Their whole demeanor exuded boredom and mystification at the popularity of certain films (The Reader, Benjamin Button just to mention two). But you can get to a place where because you prefer caviar you just won't like hot dogs anymore. Sometimes I think this is what really refined film criticism does ... along with a sneering attitude towards the Oscars.

I know they are sometimes (often) silly and tacky and self-serving but come on - how can you love films and not love watching the Oscars?

True, the red carpet preview of the big stars fails to impress with its sycophancy and silliness. Where do they find these people who stalk the stars? You can almost see the stars cringing as they ask their inane questions ...

Puzzling choices: goddess-like Angelina Jolie's green gem earrings by Lorraine Schwartz; Mickey Rourke's Jean-Paul Gaultier white suit and shiny black shoes; Miley Cyrus' multi-layered cake of a sparkly blue and white dress by Zuhair Murad; Jessica Biel looking beautiful but encased in a ivory satin sac-like dress by Prada as if she is trying to hide her shape; Entertainment Tonight's Mary Hart in a green and pink flowing mess that looked like her mother's expensive curtains torn from the walls; Philip Seymour Hoffman with that prickish look on his face and silly black toque ...

Ack - Hugh Jackman in that opening dance sequence.What an ordeal! He was trying so hard to entertain with a "impromptu" low rent dance sequence of all the best nominated films (citing - ha ha - budget cuts) and dragging a "reluctant" Anne Hathaway on stage to play Nixon to his Frost in one segment (the only funny part). Painful to watch from such an attractive and entertaining performer ... it was met, bewilderingly for me, by wild applause - perhaps for the enormous effort expended by Hugh who was literally panting by the end of it?

The format for Best Supporting Actress was very different with five previous winners in this category standing on stage (Whoopi Goldberg, Goldie Hawn, Eva Marie Saint, Tilda Swinton and Angelica Huston) introducing and announcing the winner: Penelope Cruz (threatening to faint) in a very gracious speech for her performance in Vicky Cristina Barcelona.

Later they will use the same technique in the Best Supporting Actor category with past winners Joel Grey, Alan Arkin, Cuba Gooding Jr., Kevin Kline and Christopher Walken to announce the winner (inevitably Heath Ledger) which was accepted by his family and greeted warmly by very teary, sympathetic audience.

Tina Fey and Steve Martin had a great intro for the Best Original Screenplay (Dustin Lance Black for Milk) and Best Adapted Screenplay (Slumdog Millionaire) - they seem to have beefed up the writing this year and tried to do things in a different way. For instance, the text from each screenplay was superimposed on images of each film projected. Effective and interesting ... also cute was Martin's snippy remark to Fey that she "shouldn't fall in love with hm" as she gazed adoringly at him at the podium. And who would have thought you could string the words, cute Mormon and gay in one sentence to describe Dustin Lance Black?

In Best Animated Feature (Wall-E), there was a segment where Wall-E slips in a video tape and watches a collage of all the animated films released in 2008, smartly done. Jennifer Aniston and Jack Black had a nice chemistry during the presentation; however, did we need the camera to cut to Angelina Jolie during this? What were they expecting a scowl or sneer to be caught on camera? Not cool ...

I like the way the show doubled up (or tripled up) the awards; for instance, the stylish duo of Daniel Craig and Sarah Jessica Parker announced Best Art Direction (Benajmin Buttons) and Costume Design (The Duchess) and Best Makeup (Benajmin Button). It was a very smart decision and certainly hurried the awards along in a respectful way.

Seth Rogen and James Franco were great in a skit introducing a collage of comedy films in 2008 ... two stoners on a couch laughing horribly during the serious films (The Reader or Doubt) and straight-faced during the comedies. At one stage they drag in the award winning cinematographer Janusz Kaminski (he won two Oscars for Schindler's List) who joins them on the couch literally with his Oscars, laughing inanely. They announced Best Live Action Short (Toyland).

In an interview prior to the show, Hugh Jackman said he wanted to add some more "show" to the biz; hence, a looonnng dance sequence with Beyonce singing old songs from old musicals: Chicago, Grease, Moulin Rouge, Hairspray, West Side Story, Highschool Musical 3 and melding musically with a duo by Vanessa Hudgens and Zac Efron from Highschool Musical 1, 2 and 3 as well as Domenic Cooper and Amanda Seyfried from Mamma Mia! Top hatted, long legged dancers filled the massive stage. Schmaltzy, tacky but certainly a lively ending with a half hopeful, half jubilant cry of "The musical is back!" by Jackman. [Post-script: As my s-i-l said in an e-mail Monday morning, this ain't helping with the gay rumours much Hugh.]

The Jean Hersholt Humanitarian Award went to Jerry Lewis and was presented by that other Nutty Professor Eddie Murphy. I can't abide Lewis but hey, the man has done some good work over the years ... and his speech was surprisingly short and gracious.

It's almost 11.00pm and we are starting to fade ... even the offspring is up with us watching. Zac Efron and Alicia Keyes (what no Vanessa Hudgens? they were sooo cute on the red carpet) announced Best Original Score (Slumdog Millionaire). Just in time, they also play the nominated best songs: "O Saya", "Down to Earth" from Wall-E and "Jai Ho". We are sorely in need of that Bollywood energy right about now before they announce Best Song ("Jai Ho" from Slumdog Millionaire). A burst of colour and dancing from beautiful women in colourful saris, yeah, that'll do it, that'll wake us up.

Liam Neeson and beautiful Slumdog Millionaire star Freida Pinto presented Best Foreign Film (the film Departures from Japan - yay Asians!). A nice surprise but none of us in the family Oscar pool guessed this ... so far my s-i-l J and b-in-law T are leading ... arrggh.

Queen Latifah sang "I'll be seeing you" during the annual memoriam section of departed Academy members, or, as it is known at our house: "Hey I didn't know he died!"

Best Director: Danny Boyle, Slumdog Millionaire. No surprise but welcome. Liked his little Tigger dance he did in honour of his children (now grown).

Best actress winners Nicole Kidman, Halle Berry, Sophia Loren, Shirley MacLaine and Marion Cotillard announced Best Actress. I must the say the bios of the nominated actresses was quite moving and very personal, seeming not rehearsed and often moving the nominated actresses listening to tears. The winner was Kate Winslet (The Reader) who seemed overwhelmed and joyous - sooo happy for her, she's phenomenal. It's long overdue.

The Best Actor award was presented by Robert De Niro, Ben Kingsley, Anthony Hopkins, Michael Douglas and Adrien Brody to Sean Penn who thanked all his "Commie homo loving" supporters and acknowledged that he made it difficult for people to like him. Looks like Seanie is growing a sense of humour. He also graciously acknowledged his "brother" Mickey Rourke during his acceptance speech.

Best film was presented by Steven Spielberg to Slumdog Millionaire (anti-climatic but satisfying too).

It's 11.55pm ... The offspring made it to midnight but is exhausted; the husband, slight bored, has also survived. Must tally the ballots now for family and work friends Oscar pools ... Goodnight.
Posted by A Lit Chick at 11:56 PM