Between an Antonia and a Hard Place 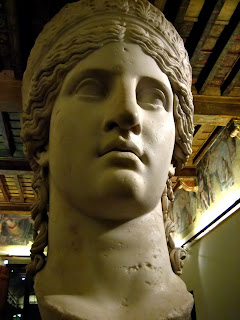 My daughter J's middle name is Antonia. She is named for her grandmother (my mother) who really dislikes her name so much so that she said "Oh no, please don't call her that!" when J was born and I told her J's middle name. But I love that name - and it's a very ancient Roman name with an imperial pedigree.

Antonia Augusta (pictured left) - daughter of Mark Antony, grand-daughter of Julia Antonia, mother of Claudius, grandmother of Caligula and great-grandmother of Nero - described by some as the most powerful matron in Imperial Rome. Okay, so the last two were complete nutters ... think of her lineage!

My mother is a very passionate, strong-willed individual having weathered the death of her first child when she was 23, the loss of her husband at 40, and raising three children on her own, managing a small business. She is very smart but has had limited educational opportunities in her life.

The women are very tough in my family. I feel like I operate at about 40% of their capacity for strength and resolve and toughness. Or do I?

The day of J's b'day party J was reading a brief review of a book she was writing for school. She read it aloud to R and I and said something to the effect that she liked the main character because she was "bossy and very demanding like my mother". Ouch! Me? I'm the marshmallow here ... I'm the one that can't take J's tears or scenes or drama. I'm the one that talks her dad out of the punishments meted out for bad behavior ... I have to admit that that hurt! But R kept saying she likes the character - you're not listening, listen to what she said!

Yesterday at my cousin's wedding reception (yes another wedding - ai yi, this family never stops!) I showed my mother one of the first copies of the new book. It is dedicated to her and my father, but, firstly, to her. She didn't say too much. This lady is not effusive or complimentary. She's old school Italian: lots of love but kick them in the pants and smarten them up sort of attitude. Don't smother them with accolades which will make them soft.

I saw her looking at the last chapter which is all about the father Salvatore (Turi) - he does not resemble my father in personality at all, but some of the things that happen to my father happen to Turi so I saw her sneaking a peek. It's quite emotional. Each time I reviewed that section during the editing process I would break down, every time. I saw her face crumpling and her eyes tearing up. I thought, oh god, what have I done to her, she stills loves this man so passionately and he has been dead for more than thirty years. I'm just torturing her by recording my memory of what happened. It's not that there is anything negative it's just the reliving of all that history that would be painful.

I kept whispering to her across the table - Ma, don't read that part yet ... I had been waiting to tell her that there were some emotional scenes in it but lacked the courage (yeah I'm afraid of la mama, wanna make something out of it?). Now here she was skipping to the last chapter and silently reading it in front of the family. But she just shot me these razor sharp looks and wouldn't relinquish the book until she was finished.

I moved away, started talking to L, one of my cousins (her dad is my mom's brother) who is intrigued with the premise of the book and has been an enthusiastic supporter of its publication. Suddenly we feel an arm draped around the two of us on either side and she shouts out happily, "Did you know I had such a smart daughter?" to everyone at the table much to our amusement.

Lady, who are you? I wanted to say. What alien life form has stolen my mother and left behind this sunny, positive creature in her place? She never compliments me, ne-ver.

So I was so pleased that she was not angered by what I had written, she seemed happy, proud ... and I was happy too because my two Antonias totally blew me away this weekend.
Posted by A Lit Chick at 3:12 PM

I love the Spanish version of the name- Antoñita. In fact, my most favorite books when I was a little girl were the Antoñita la fantastica books, written by Borita Casas. In fact, I'm rereading them now!