A Fairy Tale with Extras 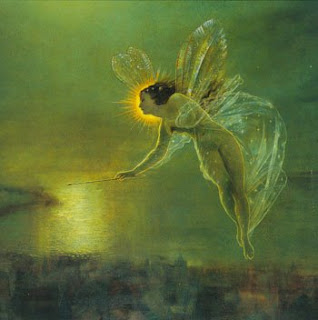 A year ago ten or twelve little girls gathered at our house for a Halloween party ... it was their last year in my daughter's grade school (grade six) and many of them would head out to different schools: public, private or alternative. The next year they would be in middle school. The little band would soon be broken up.

The house was decorated with cobwebs and realistic looking, small, plastic black rats on the table and fireplace mantle. The Halloween lights, pumpkins and skeletons, were set up glowing orange and white. Candles were lit throughout the house and an ivory coloured skull was lit up with a tea candle within. The lights were dimmed.

The girls, delighted to be going to a Halloween party at night, decided amongst themselves that many of them would go as fairies. Each would have their own colour theme - blue, yellow, pink, black, green, etc ...

They swooped in in their tutus and tiaras that night gripping glittering wands and shod in ballet slippers, some wearing lip gloss and other sparkly makeup. Not everyone was a fairy, one was a gypsy, one was a vampire. But most were fairies.

Our offspring, ever the maverick, came as ... a "dead punk rocker". Oy. Does she have to be dead? I asked the husband. Apparently so. She did.

They gobbled up the chips, candy and the popcorn and gathered around the monitor in the living room to sing karaoke sounding like pint size versions of drunken sailors as they stumbled through the songs and slurred through the lyrics with much giggling and screeching. But they had such fun. Our neighbor, who could hear their hoots of laughter, said that she had never heard girls have such a good time.

Initially J shrank back, uneasy about singing, not joining in. Unsure of herself. I urged her to join in ... she demurred. Okay, I said, if you don't start singing in five minutes, I AM going to do the karaoke. You never saw a kid jump up so fast in her short life. She sang alright ... The kid sang like there was no tomorrow.

And at the end of the night, the brightly coloured fairies and the gypsy, and the vampire, all went home, drunk on candy and soda pop and bad karaoke music ... I blew out the candles and turned off the lights knowing it would all be different next year. And it was.
Posted by A Lit Chick at 8:22 AM