Now is the Winter of Our Discontent 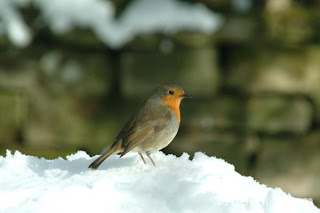 Last night we saw the offspring in a mini-Shakespearean production, one of four productions put on by her school. One of them was Richard III. I know in reading the play that the phrase "Now is the winter of our discontent" was meant to mean "the time of unhappiness is past". But that ain't what I mean when I use it here.

Ah, but I think this winter has broken me. This is one of the few times that I have said out loud that I really don't want to be in Toronto sometimes. This has precipitated an ongoing argument with the SO. I am adamant that I want to be somwhere warm when we reach our not so golden years ... he is insistent that we stay in Toronto.

I'm getting sick of this cold, this freezing rain, the snow ... I can't see living here when we are in our 60s, I say.

The look of alarm and dismay on R's face! He loves the snow, hockey, skating, the Leafs, tobogganing with J, even winter storms and shovelling snow ... ai yi yi. This will be a hard sell.

I don't want to live anywhere else in the world, he says. Or any other city in Canada.

Okay world traveller, you have been to sooo many places in the world that you have no desire to live anywhere else, or see anything else, right? I see his mind racing.

Yes! And at the top of the list of places that I don't want to live is ... MIAMI.

Miami?? Oh yes I see what this is ... two of our favourite television shows, Dexter and CSI Miami, are set in that hotbed of serial murders, crime and malfeanse. Lately, I have been extolling the virtues of that city - it's so beautiful, it's warm, the Latin culture, music and food! Art Deco architecture. Sounds wonderful to me. So R thinks that's what I've been edging toward with my increasingly anti-winter diatribes.

Silence. Stewing. Frustration on both ends over the lunch table.

Well, where DO you want to live? he asks slightly exasperated.

I don't know, somewhere warm, maybe Venice or Tuscany. Not the U.S.

My secret wish is to live amongst my own kind, to speak my mother's language. R is my kind, I want him there with me. This thought has been formulating for sometime. It is likely part and parcel of the whole Italian lessons and such. But it's a long term plan, when J is grown and settled ...

Well I'm not living anywhere where there's no ice rink! he exclaims vehemently.

I would say that that narrows it down some.
Posted by A Lit Chick at 10:26 AM