A Dove in the Hen House 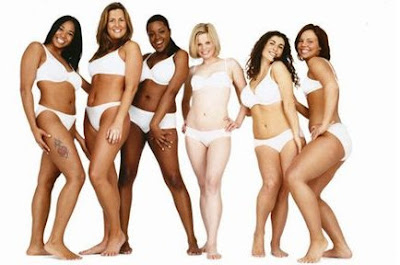 I'm not sure what to make of the Dove soap product line's Campaign for Real Beauty. Click here for three short clips that are part of this campaign (Onslaught, Evolution and Amy). The above print ad is a separate ad for another commercial that is part of the campaign (which I love by the way).


On one hand, it is refreshing to see a company challenge (at least in an ad) the accepted notions of conventional beauty and the sometimes ridiculous extremes that women will go to, to achieve "beauty".

The clip Onslaught, shows a small girl, perhaps aged 8 with a close-up of her pretty, freckled face and then follows with a barrage of rapid fire messages that young girls are exposed to daily, by the hour even: fashion and beauty ads proliferate and then the video morphs into images of all the more radical things we do to change ourselves or stave off gravity and old age: a young girl loses weight, gains weight, loses weight (we all recognize the cycle). Then it switches to images of breast implants, cosmetic surgery, botox, liposuction, etc ...

Evolution, which caused such a commotion when it was first released (it was the winner of two Cannes Advertising Awards), shows a nondescript looking model without makeup being made up, styled and then photographically altered into a more "acceptable" definition of female beauty for an ad. The reaction to this ad was a mystery to me ... the average person doesn't know that models look radically different before stylists make them up or that magazines will alter the features of a model (making her neck longer, defining her cheekbones more, brightening her eyes)? I would never agree with these tactics but is it really that shocking?

Amy, which is the simplest and the cleverest of the ads, shows a young boy biking to his friend Amy 's house and then calling out to her repeatedly to come out (she doesn't). The tag line is "Amy can name twelve things wrong with her appearance. He can't name one." It's brilliant, not flashy and very smart.

I know I will sound like that blowhard Camille Paglia, lord help me, but I will suggest that women have more free will that is sometimes supposed. Yes, we all are susceptible to the feeling that we are not sufficiently pretty, could be taller, have better hair, nicer breasts, nicer legs, should be thinner, blah blah blah. I haven't met a single woman who did not express some dissatisfaction with her body.

And I do believe that Western women have a heightened sense of inferiority that does not exist in certain other parts of the world because of this "onslaught" of media and commercial hype. I, too, have read those surveys where women have claimed that they'd rather have cancer than to be fat. This sort of idiocy completely floors me at times.

You might argue that this is a direct result of the beauty industry or, at the very least, aggravated by the industry. Perhaps yes ... I do agree that this could be the case but why relinquish your control and will to those malignant forces? Why act as if we are so weak willed that we can't resist those forces?

This panic that many progressive women seem to experience at the idea of their little girls playing with Barbies or wanting to dress up in jewelery and heels or try on makeup out of curiosity when they are five ...

Now don't get me wrong, when my daughter wanted to banish Barbie from her stack of toys (and I quote directly from the mouth of the babe: "Look at it Daddy, it's hideous!" she exclaimed looking at all her unused Barbie paraphernalia which she had received as gifts and lay completely unused). I was secretly pleased that she was rejecting that skinny little such and such and her crazed manifestation of popular girl culture.

But all societies, in all parts of the world, have standards of beauty and beauty rituals - some more pernicious and dangerous than others - footbinding in the East and cutting off bits of one's toes to fit into your Manolo Blahniks in the West - are two particularly frightening ones that come to mind. Another would be the 19th c. practice of having surgeons remove the bottom two ribs so that women could lace their corsets more tightly. Yes, these are extremely disturbing and dangerous practices ...

But let's not throw the proverbial baby out with the bath water. It is, I believe, a human desire to wish to adorn oneself, to make oneself attractive to the opposite (or same) sex. Hey, a little lipstick never hurt anyone. And aren't our beloved daughters and girls are smarter than we are giving them credit for?

Whenever I get bent out of shape thinking I should ban something or other from my daughter J's life because it will harm her self-esteem as a girl I try and remember the tactics that Linda Carroll, Courtney Love's mom, a feminist and psychotherapist, used on Courtney when she was a young girl. She banned all dolls, dresses, and all feminine identified toys from her daughter's use. Consequently, by her own admission, Courtney grew up obsessed with same. Take a look at some of her videos and you'll see. This is Love's performance of her song Doll Parts. Apparently her house is filled with girls' toys: tea sets and dolls, etc ... Granted this is the least of her issues.

I think if you try and control a child's environment too much, you may inadvertently provoke the opposite reaction in her or him.

Oh yes, and lest we forget, the principal object of the Dove campaign is revenue generation not feminist enlightenment. The Dove line currently has eighteen or so different products with almost 100 s.k.u.s (stock keeping units) including the essential Leave-In Replenishing Mist and the Regenerating Night Beauty Body Lotion. The Dove pitch ain't just about keeping it natural with soap gals.

So, what is Dove's message? Be naturally beautiful without cosmetics and all these unnecessary products and procedures but if should you need a good moisturizer because you're concerned about your skin and the aging process ...
Posted by A Lit Chick at 10:21 AM