Portraits of the artists as Men 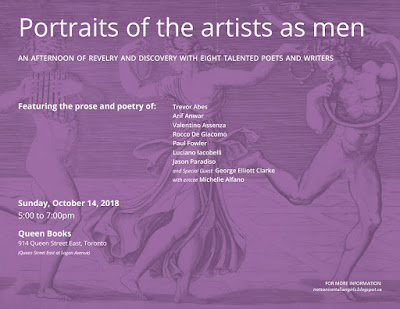 Michelle Alfano (emcee) is the author of the personal memoir The Unfinished Dollhouse (Cormorant Books, 2017) which was selected as one of The Globe 100 Best Books of the Year in 2017. Her novella, Made up of Arias, was the 2010 winner of the F.G. Bressani Award for Short Fiction. Her short story “Opera”, on which the novella was based, was a finalist for a Journey Prize anthology.

Trevor Abes is an artist from Toronto with a fondness for writing essays and poetry. He was part of the winning ensemble at the 2015 SLAMtario Spoken Word Festival, and competed in both the National Poetry Slam and the Canadian Festival of Spoken Word as part of the Toronto Poetry Slam team. His work has appeared in Torontoist, (parenthetical), untethered magazine, Spacing Magazine, Descant Magazine, The Rusty Toque, The Theatre Reader, Mooney on Theatre, The Toronto Review of Books, Hart House Review, and Sequential: Canadian Comics News & Culture, among others. Reach him on Instagram @TrevorAbes.

Arif Anwar was born in Chittagong, Bangladesh, just miles from the Bay of Bengal. He has previously worked for BRAC, one of the world’s largest nongovernmental organizations, on issues of poverty alleviation, and for UNICEF Myanmar on public health issues. Arif has a Ph.D. in education from the University of Toronto. He lives in Toronto, Canada, with his wife Si (Sandra) Lian. The Storm is his first novel.

Valentino Assenza has been a published poet and performing spoken word artist for  over the last two decades. He is the author of four chapbooks of poetry.  He is currently a co-host and a co- producer of Howl on CIUT 89.5FM.  He is due to release his first full length book of poetry Through Painted Eyes in the Fall 2018.

George Elliott Clarke has published 17 poetry titles--not only collections, but also verse-plays, libretti, verse-novels, and, currently, epic poetry. he's won a few prizes; been translated into several languages. He was Poet Laureate of Toronto (2012-2015) and Parliamentary Poet Laureate (2016-2017). He co-founded, with Michelle Alfano, "The Love Poetry Festival In honour of Milton Acorn and Gwen MacEwen".

Rocco de Giacomo is a widely published poet whose work has appeared in literary journals in Canada, Australia, England, Hong Kong and the US. The author of numerous poetry chapbooks and full-length collections, his latest, Brace Yourselves – on the representation of the individual as it relates to the Zeitgeist – was published in January 2018, through Quattro Books. Rocco lives in Toronto with his wife, Lisa Keophila, a fabric artist, and his daughters, Ava and Matilda.

Paul S. Fowler grew up in L'Anse Au Loup, Labrador and currently continues to grow up in Toronto. As of late, his creative output has largely been geared toward his band, Uncle Lavender, but he's always happy to finish a short story or two at the behest of Michelle Alfano.

Luciano Iacobelli is a Toronto Poet, publisher and visual artist. He is the author of numerous chapbooks and five full length books. His most recent book, The Examined Life was published in 2016 by Guernica Editions, and his latest book, Dolor Midnight, by Quattro books will be released in late January 2019.

Jason Paradiso is an editor/poet/writer/artist. He continues to work on his poetry project, Cut Lines & Pulled Quotes, created with rearranged clippings from dated magazines. They have appeared in a variety of publications.
Posted by A Lit Chick at 12:13 PM