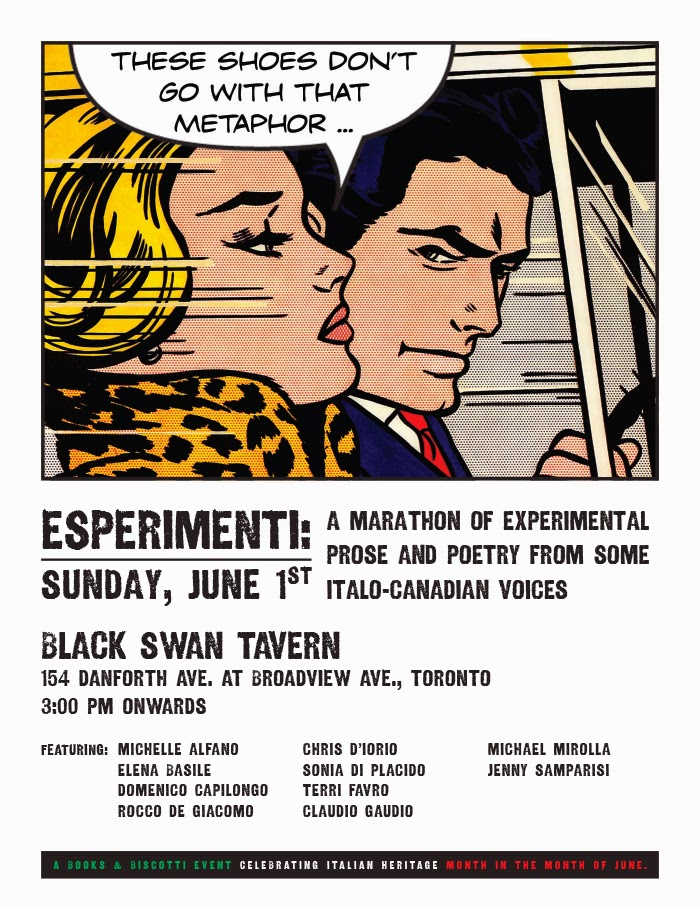 Michelle Alfano is Founder of the (Not So) Nice Italian Girls & Friends Reading Series and an Associate Editor-in-Chief with Descant. Her novella Made Up of Arias (Blaurock Press) won the 2010 Bressani Prize for Short Fiction. Her short story “Opera”, on which her novella Made Up of Arias is based, was a finalist for a Journey Prize anthology. Her fiction and non-fiction work has been widely published in major literary publications. She was recently featured in the documentary Saturnia featured on OMNI-TV and at the Moving Images Film Festival. She is currently at work at a new novel entitled Make Me Do Anything You Want.

Elena Basile is a teacher, researcher, poet and translator committed to exploring how desire is released in the spaces between languages and bodies in movement. She teaches in the Sexual Diversity Studies Programme at UofT and collaborates regularly with artists and academics in Italy, Canada and in France. Her work in English was recently recorded in a CD collection of Poetry Readings published by the Frank Iacobucci Centre for Italian Canadian Studies at UofT in 2012.  English extracts from the artist book Per Tanto Volando were recorded for the occasion. Part of her work as a literary translator and poet has been recorded in the documentary Three Women: Adapting Lives Adopting Lines.

Domenico Capilongo lives in Toronto. He teaches creative writing and karate. He has had work published in many literary magazines including Descant and Filling Station. His first book of poetry, I thought elvis was Italian was short-listed for the 2010 Bressani Literary Prize.  His second book of jazz-inspired poetry, hold the note, published by Quattro Books, was long-listed for the 2010 ReLit Award. His first book of short stories, Subtitles, published by Guernica Editions was short listed for the 2013 ReLit Award. He is working on new book of poems about the way we communicate, a book of short stories about teaching and a children’s book about a boy who doesn’t like kissing his bisnonna.


Rocco de Giacomo is a widely published poet whose work has appeared in literary journals in Canada, Australia, England, Hong Kong and the US. His work has recently been accepted for publication in Prairie Fire and The Fiddlehead, and his forthcoming collection, Every Night of Our Lives, will be published with Guernica Editions.

Chris D'Iorio wishes you all the best. He concentrates on things until words form, but questions that process. Toronto, where he lives, is also where many of you live. It's been a long time since he won anything, so we won't go into that. Quattro Books was very kind to him a few years ago and published a book of poetry called Without Blue. His day job often involves suits.

Sonia Di Placido is a poet, playwright and writer. She is a graduate of Ryerson Theatre School, Acting Ryerson University (1996) and an Hons. B.A. (Humanities) graduate of York University (2006). Sonia is a member of The League of Canadian Poets and the Association of Italian-Canadian Writers. She has been in various anthologies and journals such as Toronto Quarterly, Carousel & The Puritan Magazine. Her first book of poetry Exaltation in Cadmium Red, Guernica Editions launched in Autumn of 2012.

Eufemia Fantetti is a graduate of The Writer’s Studio at SFU and the University of Guelph’s M.F.A. in Creative Writing. Her short story collection A Recipe for Disaster & Other Unlikely Tales, was recently short-listed for the 2013 Danuta Gleed Literary Award.

Toronto freelance writer Terri Favro is the author of The Proxy Bride and co-creator of Bella comics. She’s this year’s winner of the Accenti Magazine Award and was shortlisted for the 2013 CBC Literary Prize in Creative Non-Fiction and the Broken Pencil Indie Writers Death Match. An excerpt from her novel-in-progress, “Sputnik’s Daughter”, will appear in the upcoming ‘Geek Girls’ issue of ROOM Magazine.

Claudio Gaudio is a Toronto based writer born in Calabria.  “Texas” a novel published by Quattro Books, has been translated, in part, by Francesco Loriggio to be included in an anthology of Italian Canadian writers in Calabria, by Rubbettino Editore.  and is currently being translated into Spanish for publication in Mexico. His work has also appeared in ELQ (Exile Literary Quarterly),  Rampike literary magazine and Geist.   He is currently working on his second novel "I'll Be".

Jenny Sampirisi is the author of poetry collection Croak (Coach House Books, 2011). It's about frogs and girls fusing together. It's about a lot of other things too. She is also the author of the novel is/was (Insomniac Press), a book about the public and private complexities of violence. She is the recipient of the K.M. Hunter Artist Award for Literature. Most of the time she's teaching literature courses at Ryerson University where she is an instructor in the innovative bridging program, Spanning the Gaps: Access to Education. She is currently working on a collection of poems titled What it Resembles is Slightly Too Marvelous.