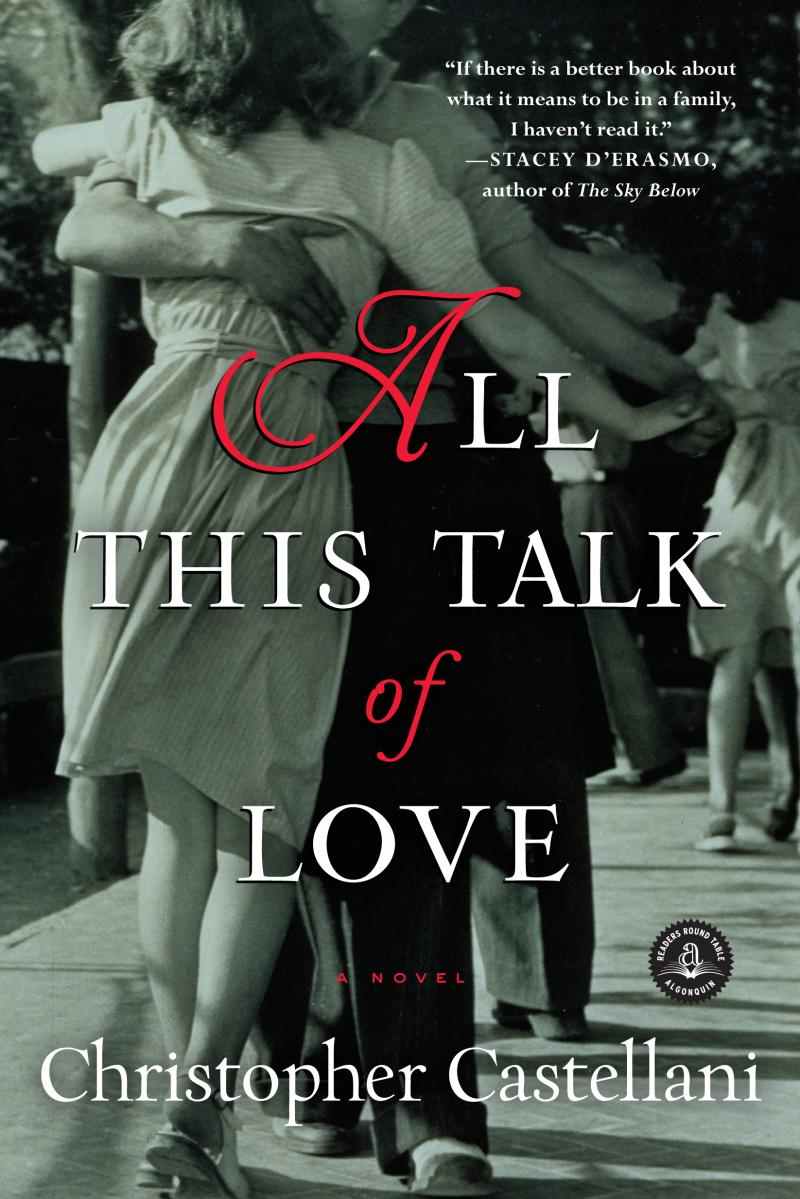 All this talk of love by Christopher Castellani (Algonquin Books of Chapel Hill, 2013) 347 pages

The mother Maddelena: youthful and energetic at 71 who vows never to become like “le patate” (the potatoes) – fat, round, Italo-American older females obsessed with their gardens and never leaving home. The dance instructor. The somewhat smothering/loving mother of three.

The eldest daughter Prima: the organizer, the obsessive, the tender of familial relations, the jealous sibling.

The eldest son Frankie: a Ph.D. candidate living (safely?) hundreds of miles away in Boston, a bit of a academically inclined black sheep, a loner.

The lost son Tony: who committed suicide decades ago as a teenager for reasons known only to his father.

I know these Italian archetypes (hell, I’ve been related to most or all of them). But Frankie, the rebellious one … Frankie fascinates me as does the ghostly brother who harboured a deadly secret that will eventually kill him.

What makes Frankie tick? Sleeps with a married professor who supervises his thesis. Nerdy. Competitive. Refuses to acknowledge the emotional impact of the death of his brother.

Prima knows that “You have to tend to a family like you tend to a garden. That’s what’s wrong with America, if you ask her, why no one’s as happy as they used to be, like in the fifties.” But what if you don’t fit into that garden? Like Frankie, like Tony …

Prima is trying desperately to organize a family trip back to her parents’ village in Italy. Maddelena refuses to go … too many memories of what she lost. A boy she was unable to marry, siblings who have been lost to her, siblings who are now ill. Only Frankie seems to support her obstinate refusal to return.

How refreshing, intriguing - is that the right word? – to have someone in the tribe pierce the facade of the happy Italian family (and it’s dark cousin the tragic Italian family) with a realistic portrait of a modern family living in America.  We are not always united, happy, loyal, close to our parents, loving, in touch with our roots. We deal with suicide, struggle with gay identities, drink too much, resent our parents’ interference in our lives, are overly invested in our children, sleep around too much with the wrong people ... We are, in short, anxious, troubled, sometimes unhappy humans.

But in the end, unfortunately, Castellani disappoints the reader. The prose is serviceable rarely elegant.

The family finally journeys to Italy and although Castellani foils the expectation that it will be a happy trip that resolves all the emotional issues that arise before the trip, sadly, the story falls flat. Maddelena is ill, too ill to understand the importance of the trip. Frankie settles into comfortable domesticity with a new woman, someone young and more malleable than the prickly Prof. Birch with whom he was involved. Prima, who suffers from a terrible accident before the trip, is quietly reconciled to the fact that she cannot control her large and growing family. Antonio tenderly nurses Maddelena. The ending lacked the sharpness I had come to expect from this author in earlier chapters of the book.

And the family never really learns the truth about Tony's suicide except for the father Antonio who is saddled with guilt over the decades since the boy died. That would have been earth shattering but real ... and extremely potent as a piece of fiction