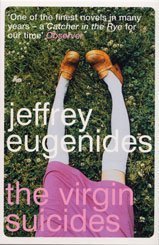 Today is the fifth anniversary of my starting the A Lit Chick blog! Who knew I had that much to say??

This is Eugenides' first novel. Labelled by some a "suburban magic-realist", he certainly tackles a topical issue - teenage suicide - in an atypical manner. The story is set in a sleepy Detroit suburb in the 1970s.

Cecilia Lisbon is an eccentric teenager who wears a ravaged wedding gown as her daily attire. She is solitary, odd - one of a brood of five much lusted after sisters who are not permitted to date. The novel begins with Cecilia's suicide during the one and only boy-girl party that the Lisbon girls are allowed to have at their home by their strict parents. Cecilia throw herself from the second story of the house and is impaled on the fence that encloses their claustrophobic, and ultimately self-imploding, home.

The story is told through an unnamed young male observer, a neighborhood boy, whose observations often begin with "we" - the collective male gaze as epitomized by the voice of a lustful teenage boy. Eventually the use of the first person plural grates ... Does the narrator represent all males? Is that what we are to assume?

We are told early that Cecilia's suicide is but the first of the Lisbon girls' suicides which lends an odd and anxious tone to the novel as we move towards its inevitably tragic end. The family falls apart, little by little. The house falls into disrepair, the garden and yard wilt and die, the girls and their parents withdraw from school and, essentially, from life. They no longer cook meals, or entertain, or socialize. They interact with no one. Even the local priest can't reach them with his ministrations. The novel then shifts focus to Lux, the prettiest of the Lisbon girls and the most obviously troubled one as manifested by her later behavior.

Lux captures the attention of the most popular boy at school who dares to ask her father Mr. Lisbon, a teacher at the school, if he might take Lux to the prom. The father reluctantly agrees when the boy offers to find dates for the three other sisters and they go en masse. This appears to be the beginning of Lux's personal rebellion when she alone defies the curfew and comes home late. Lux particularly acts out - surreptitiously making out with boys, eventually inviting boys/men to make love to her on the roof of their house under (or over) the unsuspecting gazes of the parents.

Instead of recognizing the injustice of their repressive ways, the parents tighten the reins. The girls send secret messages and ask for help - implying that they will run away with the boys who watch their every move. They display themselves before their lit windows at night in provocative ways.

Why did this novel start to irk me very early on despite some lovely passages and evocative descriptions? The girls are extremely passive. When they act out it always seems to appear as a way of attracting the boys at school and in the neighborhood. They appear purely physical beings. The workings of their tormented minds appear unknowable.

The girls exist only as objects of desire, as sexual objects. They are secret, mysterious, but perhaps this is Eugenides' point? From the perspective of a teenage boy - they are all of those things - indecipherable to the male mind. But there should be a reason why they behave the way they do. Isn't it the novelist's role to show us that? Or do the girls only exist for the boys' gratification in their fevered minds?

And what are we to make of the suicides - that they died as a result of sexual repression? Parental tyranny? The mystery dies with them and so does my interest.

"The mystery dies with them and so does my interest."

I love your blog! You have led me to some really good reading!