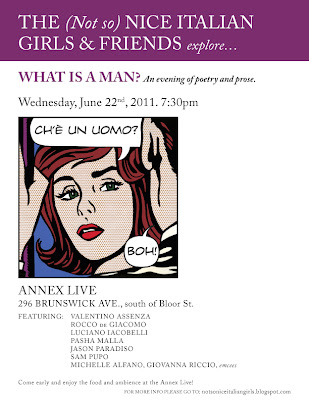 Valentino Assenza has been a published poet and spoken word artist for over the last decade. He has performed at many of the Toronto venues, and performed at many venues, and festivals across Canada. He has published four books of poetry, and is currently promoting his latest book published by Lyricalmyrical Press called Make Our Peace With Rattlesnakes.
Rocco de Giacomo is a widely published poet whose work has appeared in literary journals in Canada, Australia, England, Hong Kong and the US. His work has most recently been published in Existere and Contemporary Verse 2. Rocco’s poetry has also been featured on the CBC. He is the author of numerous chapbooks including, in 2008, Catching Dawn’s Breath. In 2009, his first full-length poetry collection, Ten Thousand Miles Between Us, was launched through Quattro Books. In 2010 Ten Thousand Miles was longlisted for the ReLit Poetry Award. In 2011, it was selected for Poetry NOW’s 3rd Annual Battle of the Bards. Rocco lives in Toronto where he writes and participates on the council for the Art Bar Poetry Series.

Luciano Iacobelli is the author of The Angel Notebook (Seraphim Editions, 2007), seven poetry chapbooks and two full length plays, The Porch and Byrdbrain. He is also the publisher, editor and designer of Lyricalmyrical Press.

Pasha Malla is the author of The Withdrawal Method (stories), All Our Grandfathers Are Ghosts (poems), and the forthcoming Why We Fight ... > Quran Neck (transliterated World War II propaganda). His first novel, People Park, will be published in 2012.

Jason Paradiso is a technical writer by day and technically a writer by night. He is also an editor and a poet who considers himself some sort of an artist too. His name has been included in a number of mastheads and his work has appeared in multiple places including Carousel, Descant, Misunderstandings Magazine and the Lennox Contemporary Gallery.

Sam Pupo was born in Italy but came to Canada when he was three years old. He has been a high school English teacher for the TCDSB for over 20 years. He began writing poetry at nineteen and has been very interested in it ever since. He says it is a pleasure making his public literary debut at this reading.﻿
Posted by A Lit Chick at 8:12 AM