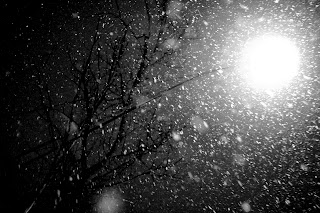 Shoveling the snow off the sidewalk last night I was thinking of an incident a few years ago (don't feel too sorry for me, I rarely do it. R does most of the heavy lifting around the house). I was trying to park our car in the driveway during a snowstorm. It was awkward because I couldn't park the car on the street and I couldn't get into the driveway so I was hurriedly trying to clear the driveway while the car was sort of blocking the one way street.

A young man, shovel in hand, came by and offered to help me. Let's call him John. When I hesitated he said, "Don't worry I'm not asking for money. I just want to help." Nice smile, friendly manner, not threatening. I said, "Great, thank you." So we quickly cleared the driveway and I was able to park the car.

When we finished he said, "If you need me to clear the snow tomorrow I can come by and do it for ten dollars. I live around the corner with my aunt. Just give me a call." He handed me his number.

So thinking I was saving myself and the husband some backbreaking work I called John the next day. This was not agreeable to R who thought this was his responsibility and can be a bit obstinate about what he sees as his husbandly role around the house. But I argued that I thought this guy could use the cash and besides he had performed a kindness by helping me out. R grudgingly agreed.

I called the number that John gave me. A woman answered but the youngish quality of her voice did not suggest an elderly aunt and the efficient way in which she processed my message seemed out of character for a family member. Perhaps it was a boarding house or halfway house of some kind I thought. And I felt uneasy that he might have felt the need to lie about this in order to secure this tiny bit of work.

John showed up that day and did a great job again. I gratefully paid him. The next day, unasked, he showed up again. I wasn't home and he told R that I had requested that he return (there was little snow that day so it seemed odd to R that I would do that). But R paid him, a trifle suspiciously. But he did not get a great feeling about this man and I find that R has unerring instincts about people so that gave me a bit of pause.

The next day John showed up again. This time, I answered the door. John was ready to shovel again even though it was light snow. I had to say no. There was really nothing to do. I told him that I would call him if I needed his help.

This was starting to irk me a bit - we went from him performing a kindness towards me, to getting a bit of money for a small job, to showing up unasked and lying about what I had asked him to do. I didn't feel comfortable having him do it anymore. So when he called the next time (I guess he sensed that he couldn't just show up at the door) I told him that my husband was going to handle it from now on. He did not sound pleased.

I felt guilty about turning him away but I also don't like to be played when I am trying to act like a human being (you have no idea how hard it is for me to be one). Then again, obviously this guy needed the money or he wouldn't be playing these silly games over ten bucks here and ten bucks there.

The next day, oddly enough, our shovel, which sits on the front porch unmolested all winter, went missing. That's never been an issue before (being careful what we left out there).