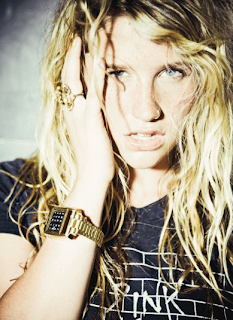 Trying to navigate the barrage of images of women in pop culture is more than a little unnerving for the parents of a teenage girl. You are trying to instill a sense of self-respect, independent thought and style in her and perhaps steer her away from the more negative portrayals of young women in the media.

And then there is the pop singer Ke$ha. Yes, Kesha with a dollar sign - that's how she spells it. Ke$ha.

You may recognize her from the video/song "Tik Tok" where she talks about brushing her teeth with a bottle of Jack before going out for a night of drinking, carousing and trying to keep guys from touching her "junk". Her other big hit is "Your Love is My Drug" where she compares herself to a crackhead because of the way she feels about a guy. I have exposure to her music because I have a teenage daughter and because I love dance music.

Ke$ha takes a lot of heat from pretty much everyone - some but not all critics, derisive listeners/spectators, the media. Is she the talentless "skank" that she is made out to be by some? Does she represent the death of pop music?

Among the gentler observations are these: "Just about the only thing Ke$ha makes convincing on Animal [her debut album] is that the current crop of party girls are every bit as soulless as they let on." and "It’s hard to remember the last time an album so flat and vacuous generated such a buzz." Her recent eccentric SNL performance either delighted with its weirdness or invited derision. Much much worse has been said (usually on music or celebrity blogs) and we don't need to repeat those criticisms here.

But is she better or worse  than other male singers - regaling us with stories of getting high or drunk, chasing "hos", and the general antics of boys gone bad. No, likely not, yet we reserve a special scorn and revulsion for the Ke$has of the world. Is she worse that Lil Wayne? Pete Doherty? Chris Brown?

As I've tried to explain to my daughter - your intelligence and talents pale before your sexual antics when you are in the public eye - they define your public persona. Whatever you are, will be viewed through the lens of your perceived sexual "digressions" as a female. I'm not sure it's that different for the average girl either. It's both absolutely unfair and absolutely true.

And every aspect of the female image is up for examination: hair, make-up, weight, breasts, clothing, jewelery, size of one's lips - no area is left unexamined and/or assessed for its desirability. You can hardly say that boys and men are evaluated in that manner in the music industry.

Welcome to the dominant representation of female sexuality in the 21st c. brought to you by youtube, the ubiquitous webcam now equipped on every computer, gossip blogs and celebrity culture. Ke$ha is likely just one 21st c. manifestation of the "Brothel without Walls" that Marshall McLuhan envisioned in the 1960s. Then, he referred to photography and the germs of celebrity obsession as “the brothel-without-walls". This was comprised of images of celebrity that “can be bought and hugged and thumbed more easily than public prostitutes".

A few weeks ago, R and I saw a CONTACT photography exhibit at the University of Toronto Art Centre by the same name - "Brothel without Walls" - that encompassed many photographic images that interested me. For me, among the most disturbing were the JonBenet style portraits of young girls by Susan Anderson (some as young as five years old) from various parts of the U.S. - made up for beauty contests complete with false eye lashes, elaborate hair weaves, lipstick, spangles and high heels. These images of little girls are as alien to me and my daughter as extra-terrestrials. The curators' notes state that Anderson is "documenting the parents' desire to measure up to the image of the world that surrounds them". I wonder.

But what hit a little closer to home were the staged photos of teenage girls by the young photographer Evan Baden (too graphic to post here or describe in great detail) in various poses of enticement: taking photos of themselves half naked in the safety of their bedrooms with their own cameras, self-pleasuring for a webcam and, thirdly, a shot of what appears to be pre-coital engagement by a young couple who are videotaping themselves for the camera, obviously to be broadcast or posted on the internet.

Baden has created and staged fictional scenarios with volunteers but what of the girls who do this in real life? Why expose themselves like this? Isn't it demeaning to these girls? Why willingly participate in this game?

Unfortunately, I would venture to say their sexuality is sometimes the only currency some girls have to trade...it is both potent and highly sought after. They know instinctively that the period during which they will be perceived as desirable is short.

What power do these girls exert in their lives? Even if they are talented, intelligent, skilled athletically? What is that compared to how they are praised, perhaps compensated and rewarded emotionally, and possibly monetarily, for their physical attributes and sexual favours?

I think there is a point when many young girls realize that certain dreams will not be realized - some too absurdly hopeful to recount aloud. They are not impossible dreams but they are mostly shall we say...unlikely, improbable. I certainly had these aspirations and they soon evaporated. If I were the scion of a rich family with endless means living in Rosedale or the Upper West side of Manhattan they might have been more easily realized. They had a greater chance of realization had I not been the eldest daughter of a working class widow with three mouths to feel in the east end of Hamilton. That's not self-pity (though it may sound it), that's just reality.

I did know at a certain point, as a young girl, that I had something desirable that others (men) wanted. Did I use those gifts wisely? Likely not. Did I fathom that this period would end soon? I think I had an strong inkling although it was never verbalized or fully articulated. That's why school and getting to university were so important for me. I'm not sure that this is an option for all girls today, even here in modern, progressive Canada.


Please don't perceive this as an endorsement of the sort of "no holds barred" sexual behavior/misbehavior that I am describing in these photos and images - merely an observation and hopefully, some insight as to what these girls are thinking when they behave in ways that might be perceived as transgressive.

And that is something that the Paris Hiltons, Lindsay Lohans, Britney Spiers, Heidi Montags, Kim Kardashians and all the webcam hotties recognize - that their power is ephemeral and it is time for them to make hay while the sun shines. Before the glare of the camera's eye - or elsewhere.
Posted by A Lit Chick at 7:00 AM

I keep writing comments for this entry and they all end up a full page long! So I will just say, AMEN PREACH IT SISTER!

It's tough don't you think? You don't want to start wagging your finger and clucking your tongue about certain things because it almost pushes kids into certain behaviors - still I'd like J to have a certain consciousness about the images she sees.

Thought-provoking. Many of my friends daughters are entering this age and I plan to share this link.