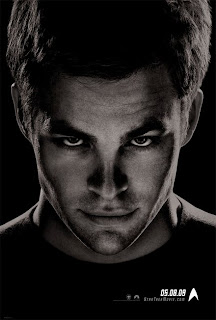 Reader, I fought it, I fought it in vain, possibly the only person on earth who did not want to see this film … I said I would accompany R and J to see it. Even J was surprised that I went as I was pretty vehement about not seeing it. I was curious as the reviews were ecstatic (the reviewers couldn’t all be Trekkies could they? I thought to myself).

But they nailed it … they truly nailed it from the casting to the convoluted pseudo scientific plot to the costumes, alien creatures and incredible cinematography and special effects.

Twenty eight year old Chris Pine (James T. Kirk) has the appropriate swagger, sex appeal and bravado to play the aspiring commander of the U.S.S. Enterprise. Pine looks like a slightly beefier version of James Dean that the filmmaker reinforces with the use of Kirk’s motorcycle and his rebellious, often dangerous antics as a boy (clue: it involves a boy, a vintage car, a highway cop and a cliff – I’ll say no more but the scene is among the best in the film). I realized with a jolt afterwards that this was the same kid who played Nicholas the male lead in Princess Diaries 2 and Just my Luck … quite the transformation.

Zach Quinto, a nice Italian boy, plays the young Spock with a frosty but commanding presence that it is surprisingly dead on and his performance is warmed up considerably by a budding love interest with the sexy and brainy Uhuru (Zoe Saldana). The film is equally weighted between Kirk and Spock with a role for Leonard Nimoy as an older Spock and a key element in the alternative universe plot.

The prerequisite villains, represented by the ever treacherous Romulans lead by Eric Bana (Nero), elicit a well-deserved shudder as they resemble, to my mind, Nazis or skin heads with their bald heads, facial tattoos, quasi military garb and warrior-like posturing. Bana is near unrecognizable, his handsome looks hidden beneath fierce tattoos and a sneer.

It strikes the right note with a tiny bit of campiness in homage to the original TV series, action, braininess and sexiness.

The “realism” of the fight scenes is a welcome note – when the characters are fighting hand to hand combat, or being jet-propelled through the air in an amazing scene with Pine and John Cho, they look dirty and sweating and bloodily cut up as they should.

Minor quibbles … I guess there is a shortage of actresses older than 50 in Hollywood seeing that they needed to cast Winona Ryder as Spock’s mother?? Trekkies likely had no trouble following the plot but I found myself like the proverbial old lady sitting mystified in the cinema and had to restrain myself from whispering to R: How did “older” Spock end up on that wintery planet? How did Kirk cheat on his test to become an officer? What did Nero mean his planet had been destroyed?? Mercifully I saved my questions for after the film.
Posted by A Lit Chick at 9:19 AM

Still so excited about these reviews! Keep em' coming! How in the world are you cranking these out???

Oh, just one more tomorrow I think Cheryl. Then the Oscars and I need a break!